Drama in court as couple fights over house keys 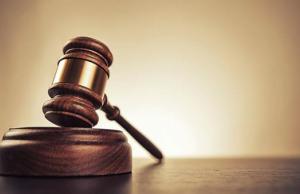 There was a mild drama at the Customary Court, Agege, Lagos on Tuesday after a wife refused to release the house keys to her husband on the order of the court.

The husband, Otunba Fatunwase Aderemi, who is the petitioner, is begging the court to dissolve his marriage to Esther Aderemi and grant his request to take custody of his 6-year-old daughter.

The husband, at the last hearing also begged the court to order his wife to allow him access to the house since he paid the rent.

The court denied the petitioner’s request to take the child into his custody as the child was still very young and ordered the respondent to release the house keys to the husband pending the outcome of the matter.

At today’s hearing, the husband told the court that his wife flouted all orders given to them and had continued to make more trouble with him.

In her response, Esther, a resident of 4 Nova road, Folayo Bus stop, Iyana Orile-Agege said she changed her mind to give her husband access to the house because she did not trust him anymore and that he could plant something in the house behind her.

Esther also said she once paid the house rent when they were living together.

In her words: “I can’t give him the key and I can’t leave his house. He once lived with me for nine years in the house I paid for.

“What if I give him key and he went to drop a dead body in the house and implicate me? It’s true I pledged to give him the key at the last hearing but I can’t do that. Besides, he has told me in January to tell my children to be paying for the house rent henceforth.”

The court’s President, Mrs. Patricia Adeyanju, who was not happy with the new development ordered the defendant to produce the key before the court or face arrest.

“Are you telling the court we are foolish? You have just made a fool of yourself, this is a court order that is beyond anybody. You agreed with us at the last hearing and now you are saying another thing,” Adeyanju said.

“If there is somebody to send to and bring the key, send them now because you’re not leaving this court today,” Adeyanju ordered.

After submitting the key to the court, Adeyanju warned the petitioner that nothing must happen to the respondent.

In his response, the petitioner said he has given the court enough time to make the decision on their matter but that it was high he started taking actions since the respondent had continued to flout the court’s orders.

“My lords, as you can see her behaviour in court, then you can imagine what I face at home with her. I refused to live in that house not because I feared her but because the court has told us to make peace. She won’t make peace with me.

“After I get my keys, I’m going to start living in that house and I am going to bring another woman in there because she cannot cook for me and I am too old to go to the kitchen, so someone must cook for me,” he said.

The courtroom became rowdy as the woman threatened to cause mayhem in the house if the petitioner brought in another woman.

The court’s President, however, told the petitioner not to bring in another woman into the house but that he could negotiate the time the respondent would move out.

She said, “You can’t bring more confusion into this matter. You can’t bring in another wife into that house, what you can do is to negotiate the time you are going to give her before she moves out. Also, If you’re divorcing your wife, you have to provide accommodation for her pending the outcome of the case.

In her ruling, the court’s President ordered the petitioner not to bring in another woman into the house and also mandated him to provide accommodation for the respondent and her daughter when the time comes.