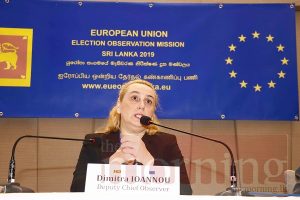 Thirty foreign election monitors from the European Union (EU) Election Observation Mission were deployed in all nine provinces of Sri Lanka on Tuesday to begin monitoring the election process, weeks ahead of the island’s presidential polls on Nov. 16.

“We are in Sri Lanka with a team of 30 highly experienced long-term observers who have been deployed to all nine provinces from Tuesday. They will be meeting a wide range of election stakeholders in their areas and begin sending first-hand accounts from the field soon,” Dimitra said.

On election day, 30 more short-term observers and 7 members from the European Parliament will join the long-term observers bringing the total mission strength to almost 70.

The EU observers will remain on the island nation till after the polls to observe any appeals or complaints that have been or may be raised. Some 35 candidates will contest Sri Lanka’s presidential election next month, while over 16 million people will cast their votes.

The Elections Commission said it has recorded over 1,000 election-related violations so far.