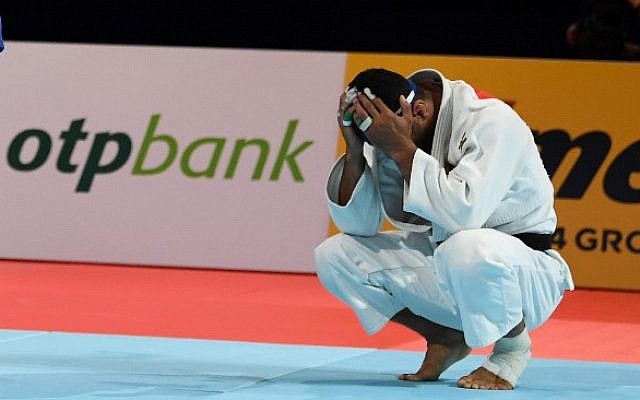 Iran's judoka Saeid Mollaei reacts after losing to Belgium's Matthias Casse in the semi-final fight in the men's under-81 kilogram category during the 2019 Judo World Championships in Tokyo on August 28, 2019. (Charly Triballeau/AFP)

The International Judo Federation (IJF) said Tuesday it had banned Iran from competition indefinitely over the country’s refusal to face Israeli competitors.

The federation issued a provisional ban last month while investigating a report that Iran had ordered a judoka to lose deliberately at the world championships to avoid facing Israeli competitor Sagi Muki in the subsequent round.

“Following the events, which occurred during the last World Judo Championships Tokyo 2019, the final suspension of the Iran Judo Federation from all competitions… has been pronounced,” the IJF said in a statement.

The IJF said the suspension will remain in place until the Iran Judo Federation “gives strong guarantees and proves that they will respect the IJF Statutes and accept that their athletes fight against Israeli athletes.”

Iranian fighter Saeid Mollaei, defending his title at the Tokyo World Championships in August, had said he was ordered to throw his semifinal rather than risk facing an Israeli in the final of the under 81kg class.

The Iranian, 27, lost the semifinal and then went on to lose his third-place fight.

Mollaei said he had been instructed to withdraw from the competition by the presidents of the Iran Judo Federation and the Iran Olympic committee.

Rejecting the charges, the Iranian federation denied that pressure had been applied to force Mollaei to withdraw from the championships.

However the IJF disciplinary commission examining the case found that Iran’s actions “constitute a serious breach and gross violation of the Statutes of the IJF, its legitimate interests, its principles and objectives.”

Judo is one of Iran’s sporting strong points and the ban comes as a blow just nine months ahead of the Tokyo Olympics.

Tehran is expected to appeal against the IJF decision at the Swiss-based Court for Arbitration of Sport. They have 21 days to do so.

Meanwhile, Culture Minister Miri Regev lauded the IJF’s ban, but said in a statement that she regretted “the heavy price Iranian athletes will have to pay because of their regime’s decisions.”

The IJF said Mollaei had been pressured to lose by Iranian deputy sports minister Davar Zani. Mollaei was also reportedly pressured to bow out by Iranian Olympic Committee president Reza Salehi Amiri, who told him minutes before his semifinal match that Iranian security services were at his parents’ house in Tehran.

The IJF said an official from the Iranian embassy in Tokyo pretending to be a coach gained access to a restricted area to coerce the 27-year-old Tehran native to lose the match as he warmed up on the sidelines.

Mollaei fled to Berlin after the championships, where he was hoping to secure a place at the 2020 Olympic games.

Iran does not recognize Israel as a country, and Iranian sports teams have for several decades had a policy of not competing against Israelis. Iranian passports remind holders in bold red they are “not entitled to travel to occupied Palestine.”

One of the most famous cases was that of Arash Miresmaeili, a two-time judo world champion who showed up overweight for his bout against an Israeli at the Olympics in Athens in 2004 and was disqualified.

He was praised by Iran’s then-president Mohammad Khatami and the ultraconservative media and eventually made his way to become the current chief of Iran’s judo federation’s chief.

Miresmaeili told Iranian media at the time he would refuse to fight an Israeli as a gesture of support for Palestine.

According to him, the current ban on the federation is “outside the usual procedure” as the disciplinary committee reviewing the case should have temporarily suspended Iran until reviews were complete and Iran had time to present its defense.