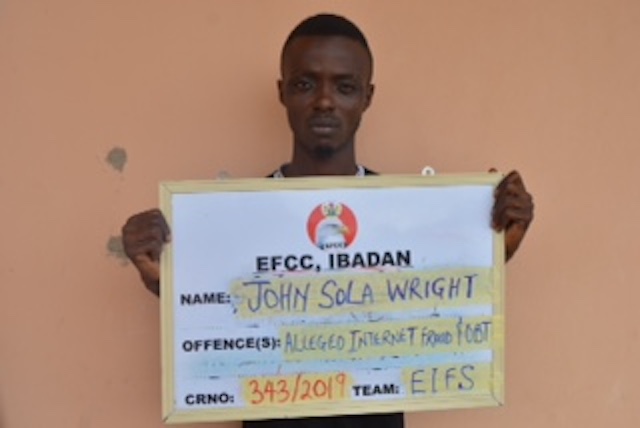 Nigerian cybercriminal Wright Shola John was sentenced to one year imprisonment on Wednesday in Ibadan for defrauding an American citizen, Erica Hegge, of $1,450.

He was sentenced by Justice Bayo Taiwo of the Oyo State High Court.

The 29-year-old, who operated with the pseudonym David Riger, was found guilty of one-count charge of obtaining money by false pretence filed against him by the Economic and Financial Crimes Commission, EFCC, Ibadan zonal office.

The offence runs contrary to Section 419 of the Criminal Code, Cap 38, Laws of Oyo State, 2000. He pleaded guilty to the charge when read to him. The plea was consequent upon a plea bargain agreement between him and the Commission.

While relating with his victim, John had falsely presented himself as a white man to gain access and subsequently preyed on her.

Due to the ‘guilty’ plea, the EFCC counsel, Abdulrasheed Lanre Suleman, prayed the court to adopt the conditions of the plea bargain agreement which included restitution of the sum in question to the owner and forfeiture of items recovered from him.

Justice Taiwo granted the prayers as he ordered that the convict pay back the $1,450 to the owner through the EFCC.

He also held that the Tecno phone recovered from him in the course of investigation be forfeited to the Federal Government of Nigeria.

His conviction takes effect from his day of arrest.