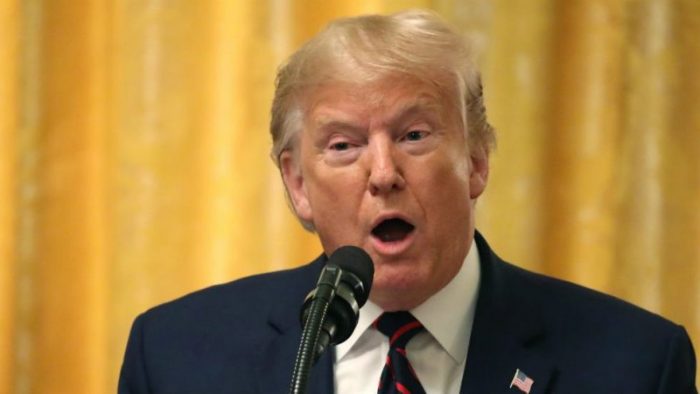 U.S. President Donald Trump on Wednesday announced the lifting of U.S. sanctions on Turkey after its recent offensive against Kurdish fighters in North-Eastern Syria.

The White House disclosed this via its twitter handle on Wednesday.

Trump said that Turkey had assured him that it would stop fighting in the region and would make the recently agreed ceasefire permanent.

The U.S. President said that should turkey fail to honour its obligations, the U.S. reserved that right to re-impose sanctions, adding that Syria, Turkey and others in the region must make sure ISIS does not regain territory.

“I greet you from the white house to announce a major breakthrough towards achieving a better future for Syria and the middle east.

“Over the last five days, you have seen that the cease-fire that we established along Syria’s border is held very well beyond most expectations.

“Early this morning, the government of Turkey informed my administration that they will be stopping combat and their offensive in Syria and making the ceasefire permanent and it will indeed be permanent.

“However, you would also define the world permanents in that part of the world as somewhat questionable, we all I understand that, but I do believe that it would be permanent.

“I have therefore instructed the Secretary of the Treasury to lift all sanctions imposed on our double fourteen in response to Turkey’s original offence moves against Syria’s North East border region.

“So the sanctions would be lifted unless something happens that we are not happy with. This was an outcome created by us, the United States and nobody else, no other nation.

“We are willing to take blame and willing to take credit. This is something they have been trying to do for many, many decades. Since then, others have come out to help and we welcome them.

“Many other countries have stepped forward and they want to help and we think that is great.

“The nations and the region must ultimately take on the responsibility of helping Turkey and Syria police their borders, we want other nations to get involved,” Trump stated.

The Turkish military have been carrying out an operation in North-Eastern Syria against a Kurdish led militia alliance previously allied to the United States.

On Oct. 9, Turkish troops and allied Syrian rebels launched an offensive to create a 30km deep safe zone along the Syrian side of the border.

Following the attack, on Oct. 14, Trump halted negotiations on a 100 billion dollars trade deal with Turkey, raised steel tariffs and back up to 50 per cent, imposing sanctions on three Senior Turkish officials.

He also imposed sanctions on Turkey’s Defence and Energy Ministries.