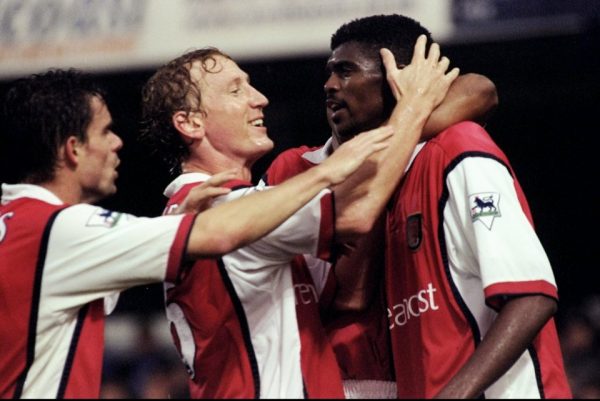 Josh Fordham of Talksport.com celebrates Nigerian striker Nwankwo Kanu’s hat-trick against Chelsea in a match with Arsenal in 1999. The hat-trick turned the derby in Arsenal’s favour and made Kanu an Arsenal hero. We share Fordham’s report:

Nwankwo Kanu was a popular figure at Arsenal during his five-and-a-half seasons at the club.

His finest moment came exactly 20 years ago when he scored a sensational hat-trick against Chelsea in the final 15 minutes of the match to grab an unlikely 3-2 win.

Kanu single-handedly won the game for Arsenal against Chelsea in 1999.

The Gunners had signed Kanu for around £4.15million in February 1999 and finished the season well with seven goals in 17 games.

It was the match at Stamford Bridge on October 23, 1999 that endeared himself to the fans when he single-handedly won that game.

Chelsea looked to have wrapped up the fiercely contested London derby with 30 minutes to go thanks to headers from Tore Andre Flo and Dan Petrescu.

Goalkeeper Ed De Goey had not conceded a Premier League goal at Stamford Bridge at that time so the idea of an Arsenal comeback seemed unlikely.

Nigerian striker Kanu had other ideas, though.

With 15 minutes left to go, Kanu intercepted a Marc Overmars shot and toe poked it into the bottom corner to make it 2-1.

Overmars was again the provider as he fired a cross into the box that the striker controlled into space and fired in to De Goey’s near post with seven minutes left.

He needed no help for his hat-trick goal, though, as it was a fantastic individual effort.

Kanu won the ball back on the touchline and for some bizarre reason De Goey came racing out to try and tackle the Arsenal man.

He rounded the goalkeeper but was faced with an impossible angle and four Chelsea defenders between himself and the goal.

Undeterred, he smashed the ball into the top corner over the heads of Frank Leboeuf and Marcel Desailly to seal the 3-2 win.

Kanu went on to be named African Footballer of the Year for the second time in 1999 and scored 16 goals in all competitions that season.