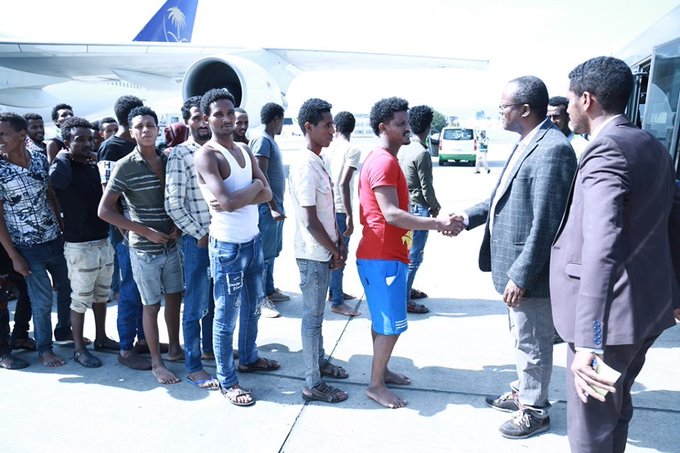 The returnees were welcomed at Bole International Airport, in the capital Addis Ababa, by an official from Ethiopia's Ministry of Foreign Affairs.
Image: COURTESY

The Ethiopian government has in recent weeks repatriated 400 nationals from Saudi Arabia, an Ethiopian official said on Friday.

Nebiat Getachew, the spokesperson for Ethiopia Ministry of Foreign Affairs, said Ethiopia had in recent weeks facilitated the repatriation of 400 nationals, who were stranded in Saudi Arabia.

He said the 400 nationals, who were living as undocumented migrants in Saudi Arabia were returned home with collaboration from the Saudi Arabia government.

“In addition to returning home stranded Ethiopians from Saudi Arabia, Ethiopia is also working to return nationals stranded in other Middle Eastern countries such as Lebanon and Yemen,” Getachew said.

“Ethiopia has already signed overseas employment agreements with the governments of Saudi Arabia, United Arab Emirates and Jordan, while it’s near to completing similar kind of agreement with the Lebanese government,” he further said.

In spite of a growing economy and public awareness campaigns on the dangers of human trafficking by the Ethiopian government, it is estimated that thousands of Ethiopians are trafficked to Saudi Arabia.

Also others are trafficking to various other countries annually, where they are mainly engaged in the informal economy.

In addition to imprisonment and various other hurdles, desperate Ethiopian migrants also often encounter many deadly calamities as they attempt to cross the dangerous Red Sea route hoping to reach the Middle East via war-torn Yemen before they reach their targeted destination — Saudi Arabia.