LASEMA rescues 5 at another building collapse 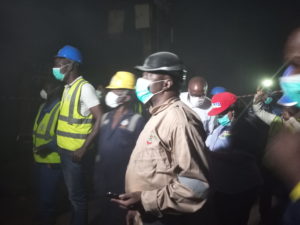 From fourth left , the Director-General, Lagos State Emergency Management Agency (LASEMA), Dr Olufemi Oke-Osanyintolu and officials of other environmental agencies at the scene of the collapse 2 storey building at Ojuelegba, Lagos. (Photo/NAN)

The Lagos State Emergency Management Agency (LASEMA), during overnight operation on Thursday, rescued five victims in another collapsed building in the Ojuelegba area of Surulere.

The Chief Executive Officer, LASEMA, Dr. Oluwafemi Oke-Osanyintolu, who confirmed this to newsmen on Friday in Lagos said the victims were rescued after the building was pulled down to the ground zero about 11 p.m.

Oke-Osanyintolu said the accident occurred at 9.15 p.m., adding that the rescue was in collaboration with the Lagos State Building Control Agency (LASBCA).

He said: “The most important thing is that we rescued five people alive while pulling down the building to save lives and property to the residents. When we got to the building, we discovered that the building was highly unstable, LASBCA had marked the building on March 25, 2015, and May 21 while the residents and the landlord were warned to vacate their premises.

“We need to perform, urgently, the construction and re-development of that area because of the safety of lives and property. We then have to use our sophisticated equipment to check whether people are under the debris. With our equipment, we pulled down the building to the ground zero,” the chief executive officer said.

Oke-Osanyintolu urged residents in the state to ensure their buildings were properly maintained, adding that emergency was everybody’s business. He, however, announced plans by the agency to conduct a test on all buildings within the area, to ensure the safety of the environment in the locality.

Also speaking to newsmen, the General Manager, LASBCA, Mrs. Abiola Kosegbe, said the agency had identified and marked the collapsed building in question in 2015 and 2019. She said that the marking was done after conducting a text which indicated that the property was in a distress.

“Our officers visited the building and sealed it to avoid loss of life, the investigation showed that some of the tenants caught off the seal notice and continued living in the premises,” she said.

Kosegbe urged the residents to avoid living in a building in distress in their good and the interest of the community in general. She also advised residents and prospective landlords to ensure that they carryout Non-Destructive Testing (NDT) to evaluate the quality of materials used in the building.

Another government official, Mr. Yinka Jonathan, urged the state government to compel building engineers to always go through a series of tests to ensure solid erection of the building.

Jonathan, however, stressed that if the government was not satisfied with the standard of a particular building, it should stop people from renting such a structure.

The Deputy Leader, Surulere Local Government Council, Mr. Adebisi Davis, who expressed disappointment over the sad development, however, thanked God for saving lives in the incident.