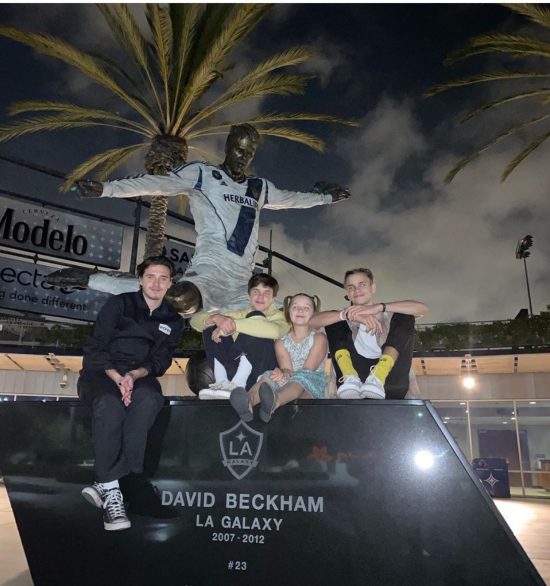 Beckham's children at the base of his statue at LA Galaxy

Former soccer star, David Beckham took his four children to Los Angeles at the weekend to show them his statue at the Dignity Health Sports Park, which is the home of David’s former team, the LA Galaxy.

In the two photographs posted along with the caption, the children, sons Cruz David, 14, Romeo James, 17, and Brooklyn, 20, and 8-year-old daughter Harper, are shown sitting at the base of the statue.

The statue was unveiled earlier this year to commemorate Beckham’s five years as a member of the team.

“What do you think?” David asks his children in a video of the special moment, jokingly adding, “My bum big?Your names are on the boots as well,” he added.

Beckham who is now the president of Inter Miami CF and co-owner of Salford City, played for Manchester United, Preston North End, Real Madrid, Milan, LA Galaxy, Paris Saint-Germain and the England national team, for which he held the appearance record for an outfield player until 2016.

He is the first English player to win league titles in four countries: England, Spain, the United States and France. He retired in May 2013 after a 20-year career, during which he won 19 major trophies.

The legendary midfielder, along with Courteney Cox will be guest starring in “Modern Family” in the show’s final season.