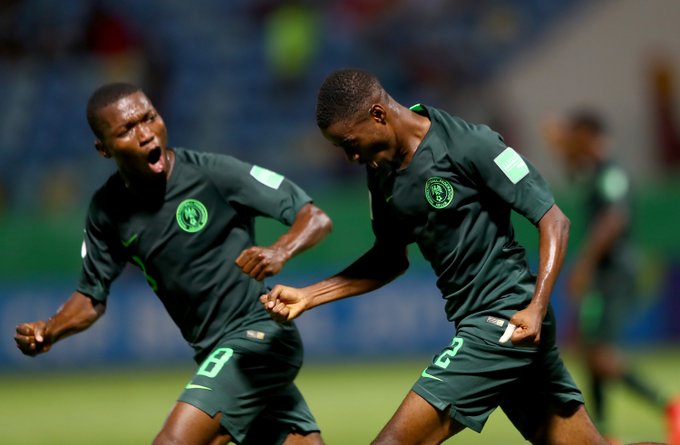 Nigeria’s Golden Eaglets rallied in the first match of their Group B in the FIFA U-17 World Cup in Brazil to beat Hungary 4-2.

The scoreline was 1-2 against the Nigerian team in the first half. Hungary scored in the 3rd minute, with Nigeria equalising 20 minutes after, with a goal by Captain Samson Tijani from the penalty spot.

But four minutes after, Hungary were back in front.

The second half however saw the Nigerian lads pumping in three goals to take the three points and come top of the group.

Nigeria began the comeback in the 78th minute after some substitutions. First an equaliser by Usman Ibrahim at this moment, followed by a third goal in the 81st minute by Oluwatimilehin Adeniyi and a fourth via a superb freekick by the captain, Tijani in the 85th minute.

Ecuador beat Australia 2-1 in the second match of the group. 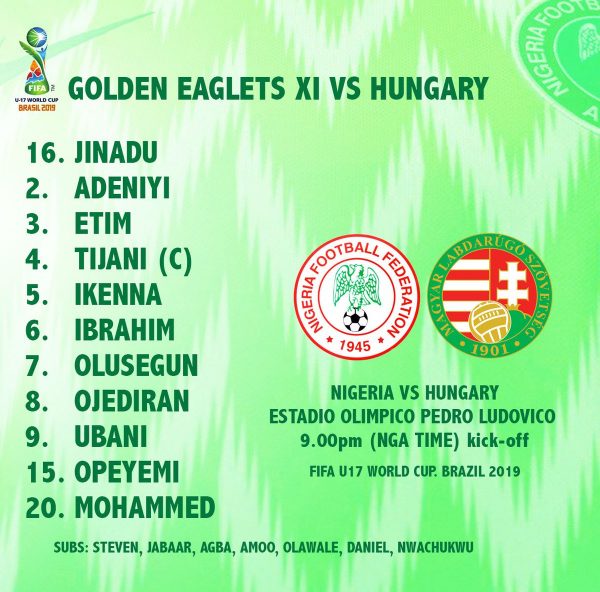 Nigeria will meet Ecuador on 29 October while Australia and Hungary will also meet same day.

The Eaglets scored three goals in six second half minutes, and they were just a reward for their persistence and determination.

Just like what happened when both teams last met at the championship — the inaugural edition in China 34 years ago — Hungary drew the first blood.

That was after Wisdom Ubani had been upended in the box.

Tijani’s equaliser was Nigeria’s 150th goal in the history of the FIFA Under-17 World Cup.

Yet, the Europeans would again go into the lead, when Samuel Major placed the ball clinically beyond Jinadu from a counter-attack as the Nigerian defence was again caught napping.

Still unruffled, the Eaglets continued to launch onslaught after onslaught, but were undone by a combination of short passes, hyper-ventilation and wayward shooting.

On resumption of the second half at the Estadio Olimpico in Goiania, the Eaglets took full control, dictating the pace and creating goalscoring opportunities.

The introduction of Akinkunmi Amoo and Ibrahim Jabaar invigorated the Nigerian side, and in the 79th minute, defender Usman Ibrahim scored.

He was on the alert to head the ball into the net from a corner kick by Sa’id as goalkeeper Hegyi made a poor job of coming out to claim the ball.

Two minutes later, it was 3-2 after Jabaar’s dazzling run ended with a pullout from the left, which defender Oluwatimilehin Adeniyi headed past Hegyi even as Donat Orosz tried in vain to stop the contact.

Tijani made the scoreline safe for a hardworking Nigeria side in the 85th minute.

His angled free-kick from 23 yards out was deflected by the head of Botond Balogh to wrong-foot Hegyi.

In the other match of the opening day, host nation Brazil pounded Canada 4-1 in Brasilia.