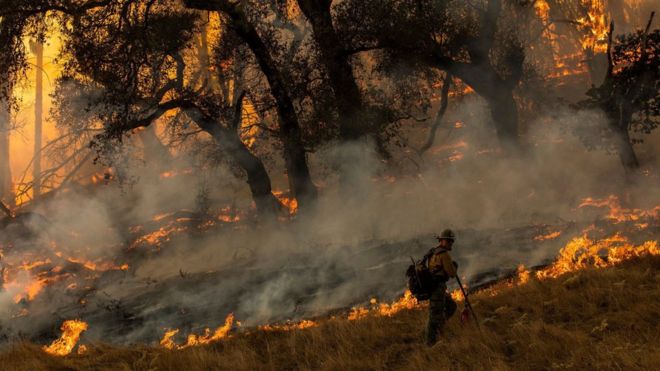 As wildfires continue to rage in Calofornia, a state of emergency has been declared in Los Angeles and Sonoma counties, while power cuts expected to affect more than two million people have begun.

Pacific Gas & Electric (PG&E) initiated the precautionary blackout – expected to be the largest in state history – due to forecasts of extreme winds, which it said could damage facilities and cause new fires.

According to the BBC, California Governor Gavin Newsom said the outages were “unacceptable”.

Some 90,000 people have been ordered to evacuate towns in northern California.

The new evacuation order encompasses a huge area of Sonoma County, where the Kincade Fire has already burned through 25,455 acres (10,300 hectares) of land.

A state of emergency has been declared in Los Angeles and Sonoma counties, and thousands of firefighters are battling the blazes.

The outages are expected to last until Monday.

The Kincade Fire in northern California began seven minutes after a nearby power line was damaged, but PG&E has not yet confirmed if the power glitch started the blaze.

The company is already seeking bankruptcy protection as it faces lawsuits over last year’s Camp Fire, which killed 85 people. The deadliest wildfire in the state’s history was sparked by ageing equipment owned by PG&E. It spawned billions of dollars in liability claims against the company.

In a video posted to Twitter on Saturday, Governor Newsom said the power cuts were “infuriating everyone, and rightfully so”.

“We are going to do our best to get through these high wind events…and get these lights back on and do everything in our power to make sure PG&E’s never in a position where they’re doing this to us again,” he said.