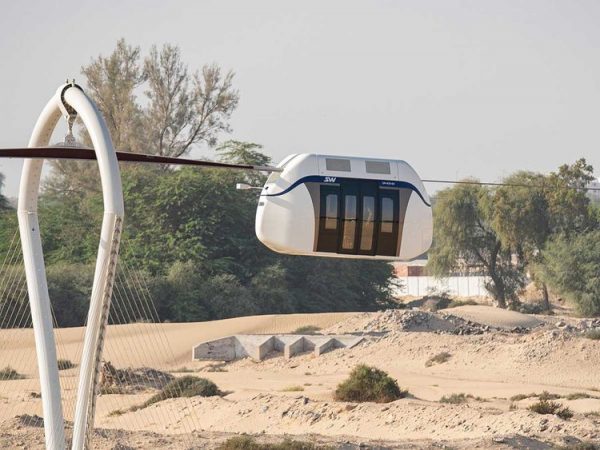 Sharjah in United Arab Emirates has found the solution to beat the traffic jams as it is in the process of introducing the hanging railway system called ‘The Skyway Project’.

Gulf News reported today that the trial run of Skyway project using the hanging pods named ‘Unicars’ is set to begin soon at the manufacturing facility in Sharjah.

The hanging track or the elevated railway system will be the future of transport for passengers and even cargo in Sharjah, the newspaper reported.

Ruler of Sharjah, Dr Sheikh Sultan Bin Muhammad Al Qasimi, on Saturday witnessed the launch of the experimental phase of the Skyway project for a hanging track transport system at the Sharjah Research, Technology and Innovation Park (SRTIP).

He visited the SRTIP where he inspected the work on the project and witnessed the test operation for one of the unicars.

He was briefed by the SRTIP officials with regards to the latest developments and the state-of-the-art technologies used in the project. He also witnessed the launch of the experimental phase of the unicar.

The SRTIP hosts one of the biggest and most developed scientific research centres of smart transport in the world. The Skyway Green Tech, which launched its operation in the STRIP recently is developing the Unicars which is seen as one of the modern concepts for urban transportation.

The Skyway Green Tech has already started the construction at the site to build three Skyway hanging test tracks that will be able to carry cargo and passengers to and from the beginning of the Park (Sharjah Airport road) to the end of the park (Muwaileh Road), wam reported.

Short track tests have already been laid out and the testing of unicars will begin soon on longer tracks.

Once the system is tested successfully, the government is expected to announce construction of its routes within Sharjah city.