Day of reckoning for 3 Yahoo Yahoo boys jailed in Ibadan 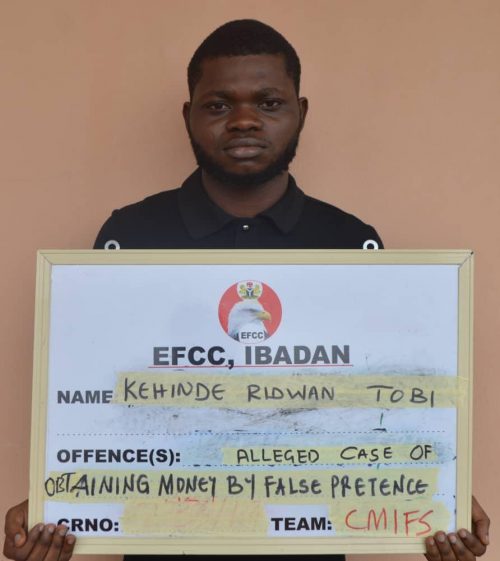 Three Internet fraudsters were sentenced today to various jail terms in Ibadan,after being found guilty of criminal charges preferred against them by the Economic and Financial Crimes Commission, EFCC, Ibadan zonal office.

The trio – Ajao Jamal, Olawale Joel and Kehinde Ridwan Tobi – were re-arraigned after approaching the Commission for plea bargain.

They were sentenced by Justice Joyce Abdulmalik of the Federal High Court, Ibadan.

Ajao and Joel were jointly brought before the court on a one-count amended charge bordering on fraudulent impersonation, an offence contrary to Section 27(1) of the Cybercrimes (Prohibition, Prevention etc.) Act, 2015 and punishable under Section 22(4) of the same Act. They pleaded guilty to the charge.

EFCC counsel Oyelakin Oyediran thereafter prayed the court to sentence them according to the terms of the plea bargain agreement.

They were jailed six months each.

Kehinde, who was tried separately, was originally arraigned on June 28 on a three-count charge of being in possession of fraudulent documents contrary to Section 6 and 8(b) of the Advance Fee Fraud and Other Related Offences Act, 2006.

The defendant equally later approached the Commission for a plea bargain.

Based on the plea bargain arrangement, he was re-arraigned on October 7, 2019 on a one-count amended charge bordering on fraudulent impersonation. He also pleaded guilty to the said charge.

However, Kehinde’s day of reckoning only came on Wednesday when the presiding judge sentenced him to one year in prison.

He was also ordered to forfeit to the Federal Government of Nigeria his Iphone 6s Plus, a Nokia phone, an HP Laptop, one ZTE modem WIFI and an Itel phone.

Apart from their jail terms, the court also ordered Ajao and Joel to restitute through the Federal Government to their victim the sum of USD $800 (Eight Hundred United States Dollars). They are also to forfeit all items recovered from them during the investigation.