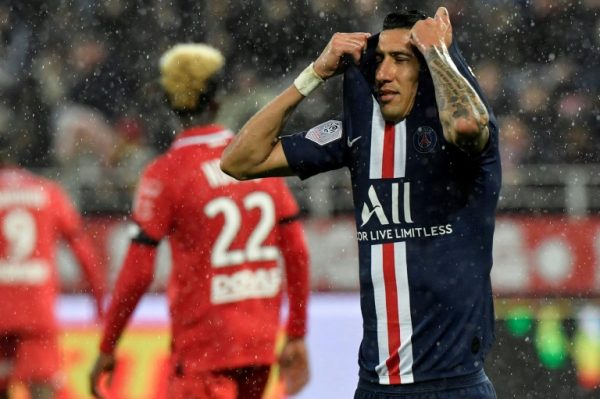 Shame: A PSG player, right could not believe Dijon beat them

The shock defeat left PSG coach Thomas Tuchel accusing his team of “being too passive and not playing together”.

It was the third loss of the Ligue 1 season for the French champions who could also see their lead at the top trimmed to just five points by the end of the weekend.

Dijon, who started the day at the foot of the table with just nine points, fell behind to Kylian Mbappe’s fifth goal in seven games.

However, Mounir Chouiar levelled in the sixth minute of stoppage time in the first half before Venezuelan international Jhonder Cadiz hit the winner in the 47th minute.

“We were too passive in the first half, not only in defence but also in attack because we did not play together,” said Tuchel.

“We lacked precision and rhythm. It was much better in the second half because we had three shots before half-time and 17 after the break. Maybe we didn’t deserve to have success or luck with us today.”

PSG were without the injured Neymar but looked more than capable of blowing away a Dijon team who had managed to score just six goals in 11 games before Friday’s match which was played out in torrential rain.

Dijon had previously never defeated PSG in the top flight in 2011, conceding 31 goals in eight meetings.

Mbappe gave PSG the lead in the 19th minute after a terrible mix-up in the Dijon defence allowed Angel Di Maria to steal possession and feed Mbappe.

The French World Cup winner finished with a delightful chip over Alfred Gomis in the Dijon goal.

After the match was held up due to a nasty blow suffered by Fouad Chafik who collided with Gomis, Dijon were on level terms.

Didier Ndong crossed from the right with PSG keeper Keylor Navas clearing the ball only as far as Chouiar who hit the target.

Two minutes into the second period, Cadiz shrugged off the attentions of Marquinhos and Idrissa Gueye before tucking away a left foot shot between the legs of Navas.

“We hate to lose,” added Tuchel. “It could have been possible to win given the number of chances we created. We always say that we are in another league. We must accept defeat and improve but I retain confidence in my players.”

The three points lifted Dijon into third from bottom in the Ligue 1 table while PSG will now need to regroup before facing Club Brugge in the Champions League at home on Wednesday.