Emir of Daura to Osinbajo: You are the most trustworthy VP ever 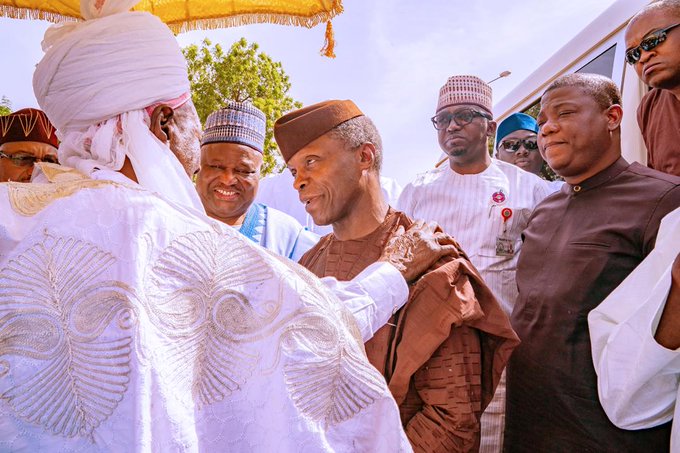 Vice President Yemi Osinbajo earned the plaudits of the Emir of Daura Alhaji Faruk Umar on Saturday for his loyalty and commitment to the administration of President Muhammadu Buhari.

Umar, who rules over Buhari’s hometown, described Osinbajo as the most trustworthy vice president of Nigeria who has the best interest of Nigeria on his mind.

Osinbajo was in Daura for the turbaning of Buhari’s nephew, Alhaji Musa Haro.

Haro was bestowed with one of Daura emirate’s highest traditional title, Danmadamin Daura, by the emir.

The emir said that the traditional institutions in the state and the country would continue to identify with the Buhari-led administration.

The royal father noted that the turbaning of Haro as a district head without portfolio was due to his contributions to the development of the emirate and Nigeria at large.

Prominent among the dignitaries who attended the ceremony were the chief of staff to the president, Abba Kyari, Secretary to the Federal Government, Mr Boss Mustapha, Gov Nasir El-Rufai of Kaduna State and the deputy governors of Jigawa, Sokoto, Zamfara, Yobe and Kano states.