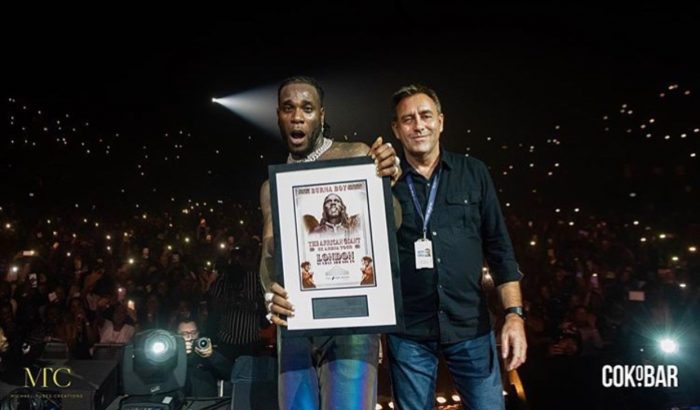 Burna Boy gets a certificate for sold out concert at SSE Arena, formerly known as Wembley Arena

Burna Boy has kept breaking new grounds. On the day that he won the MTV EMA award as Best African Act, the Nigerian singer also became the first Afrobeat star to have a sold-out concert at the SSE Arena, formerly called Wembley Arena.

Renamed the SSE Arena in 2016, Wembley Arena, the ninth largest in the UK is a 12,500-seat facility and London’s second largest indoor arena, after The 02 Arena, where Wizkid had also had sold-out concerts. The 02 Arena can accommodate 20,000 people.

Burna Boy, whose full name is Damini Ebunoluwa Ogulu had an unforgettable show on Sunday, making an entry via the mouth of a giant gorilla.

The singer was given a plaque from the management of the venue in recognition of his feat.

Before the sold-out concert, Burna Boy took to his Instagram account page and called the event, “The biggest one yet.”

At the concert, Burna Boy was joined by his Nigerian compatriots, Wizkid and Davido. Davido performed hits like ‘If,’ ‘Fall,’ Blow My Mind’ and so forth. Wizkid, after performing at a private event in Nigeria, had flown back to London to join Burna Boy. The peak of his performance was the 2018 smash hit, ‘Soco.’

Santan Dave, Manifest, Ij Wstrn and Stormzy were also performers at the concert.

Mama Burna Boy was brought on stage, amidst cheers from the fans.

Watch some of the video clips of the show: