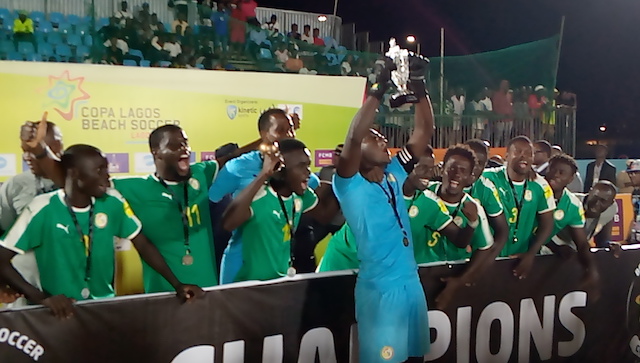 The Sand Terranga Lions of Senegal were on Sunday once again crowned champions of the 2019 COPA Lagos as they successfully defended the crown they won in 2018.

The Senegalese won all their matches in the 2019 tournament to emerge champions.

Senegal defeated Brazil 5-4 in their first match and beat Nigeria 5-2 in their second encounter, while their last match with the Three Lions of England ended 3-2.

In the last last match of the day, Nigeria defeated the World Champions, Brazil, by 6-5 to emerge the second.

The highest goal scorer of the tournament with seven goals, Emeka Ogbonna, said that the Nigerian team were satisfied with their performance.

“We are satisfied with our game so far; if we can defeat the World Champions Brazil, then, it tells of the quality of our team.

“We will intensify training to be well-prepared for the World Cup,” he said.

Al-Seyni Ndiaye of Senegal won the Goalkeeper of the Tournament prize while his compatriot, Lassana Diassy, emerged the tournament”s most valuable player.