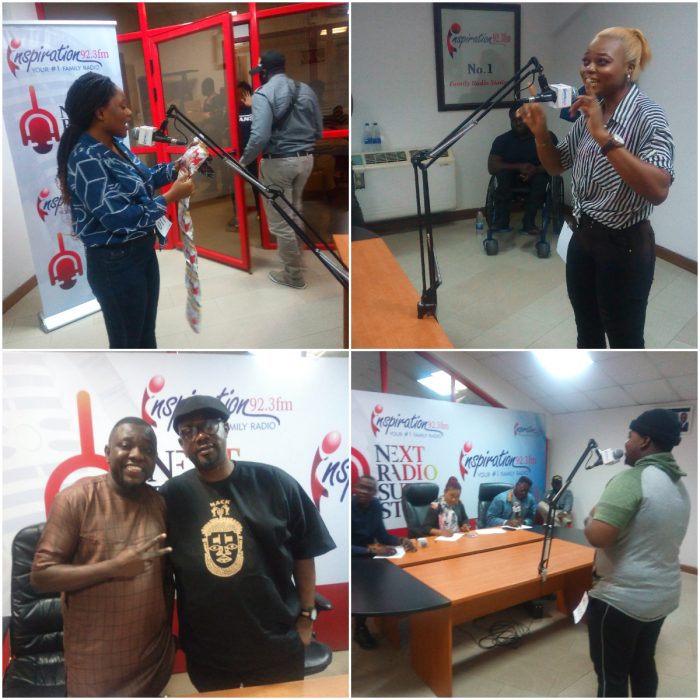 Photos from the event

It was a display of talents, skills and originality at the 2019 Inspiration 92.3 FM’s ‘Next Radio Super Star’ audition at the weekend. Over 500 youths are slugging it out to emerge winner of the show and pocket a cash prize of N250,000 plus one year contract with the station.

The Ligali Ayorinde’s headquarters of the station was agog, as youths, undergraduates and graduates tried to impress the judges and to be accepted as the next radio hero or diva.

This year’s edition is the 5th in the series in the programme aimed at empowering and inspiring the next generation of Nigerian youths.

“The idea is to inspire the next generation of Nigerians youths. The audition is every year; on yearly basis we try to discover one major talent, that is the winner of the Next Radio Super Stars and then you have others, there is first, second and third position and it is a pool, if you make the top 15, you still have chance of working with us,” says Olalekan Olajolumo, popularly known as VJ O-SQUARE, Head, Broadcast Services, Programmes, Content, News and Sports, Inspiration 92.3 FM/National Network.

The audition was held on Saturday with another expected to hold on 9 November, 2019.

Making the audition more hilarious and as comic relief was ace actor and comedian, Charles Inojie. He was the Celebrity Judge at the audition. His presence calms the nerves of nervous contestants as he would intermittently drop his rib-cracking jokes.

To enter for the competition, one just has to post a 60 seconds video of his or her radio presentation and tag @ifm92.3 on Instagram or come for the Live audition which held at the weekend and another to hold on 9 November.

After an awesome presentation, Imonitie Cynthia Omo, a blogger and a 25-year-old Linguistic graduate of the Obafemi Awolowo University, OAU, said she stood a good chance of becoming the next radio super star.

“My voice stands me out; my skills, my research skills, make me stand out and if you want to find something anywhere, Cynthia is your girl. I have a good chance,” she said.

Gideo Keshi, 24, a final year student of Chemistry at the University of Lagos, is upbeat about his chance of winning. He also had a spectacular presentation and he said: “I am a person who has charisma and I am social too. I have the basic requirement of a broadcaster, like talking well and fluently. I hope I did very well because I was nervous.”

Also, Precious Ihensekhien, 22, a graduate of the Ambrose Alli University, Ekpoma, Edo State had a stupendous performance. Though she did not study Mass Communication, her skills stood her out at the competition.

She said: “Growing up, I had always wanted to be in the media, I have trained myself to be OAP, I like to talk to people and address lots of people. People have been telling me I should be in the media. I wanted to study Mass Communication but they gave me Philosophy.”

What do the judges look out for when scoring the contestants?

Foluso Tade, one of the judges explained: “It is basically down to authenticity, originality, which is key and we are generally looking for people who are not trying to be like others, people who are themselves. We are trying to unearth people who have their unique styles, creativity, we just want someone natural.”

According to VJ O-SQUARE, winning the event was not limited only to the first position, “but of course, the first position picks up a contract with the radio station for one year and if there is vacancy within the system, they can come in. The idea is to inspire the Nigerian youths, to make them believe that their dreams can be achieved.

“Some of the contestants are still in school that is the beauty of it; you discover their talents at an early age. If you have the talent, it does not matter if you are still in school, we train you; we groom you to be a fully baked broadcaster. This is how we contribute our fair share to the society.

“We are building careers, families, the young ones and the future is bright for the nation. The judges look at everything to get the winner, the judges look at eloquence, points, they looked at how crazy you are; they check the content, composure, extra skills, originality, how authentic you are. Whoever emerges the next radio super star emerges the next hit on the radio. By middle of December, we are expecting another radio super star,” he said.

Speaking, Inojie said government could create opportunity for the development of budding talents among the youths, particularly the entertainment sector.

“We have a huge army of talents just waiting for a platform, that is why we must congratulate Inspiration FM for this noble idea, but how many Inspiration FM do we have? Which goes to say how much really can they do? They can only do what they can do. No matter how much of charity they want to do, they cannot absolve more than the capacity that is already on ground that is where we need government’s support.

“An institution like this, if they can get the right funding, I am sure they will be able to do more. Inspiration FM cannot be in all states of the federation, that is where the government, federal or state can come in,” he stated.