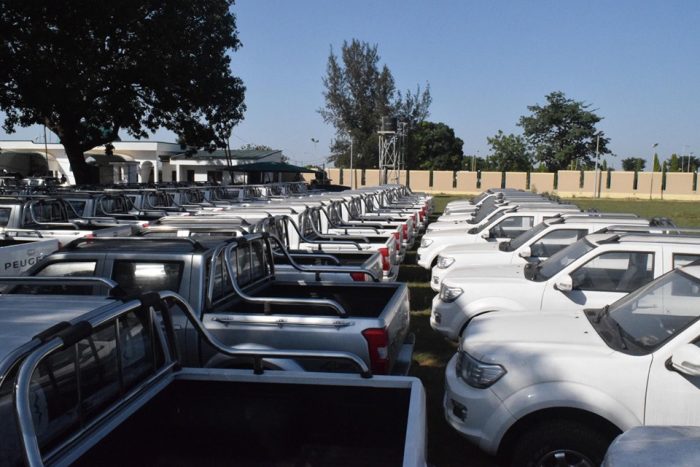 Some of the vehicles

The Kaduna State Government on Tuesday presented 85 new vehicles to security agencies to help in the battle against banditry in the state.

The presentations were made after security consultations earlier today with stakeholders from Birnin Gwari, Igabi and Chikun local government areas. KDSG officials, security agencies, federal and state legislators, together with community and traditional rulers discussed the menace of banditry in the three local government areas.

Speaking at the event, Governor Nasir El-Rufai, said about four years ago, the government presented over 100 such vehicles to security agencies and that over the years, government had provided additional interventions of vehicles, motorcycles and communications equipment on a continuous basis.

“We are here today to present 85 vehicles motorcycles to further enhance the logistic capabilities of our security agencies. This is a continuation of the robust support the Kaduna State Government has provided to help the federal security agencies in the task of securing our state, its people, their property and livelihoods.

“Security is constitutionally the exclusive prerogative of the Federal Government which controls and deploys all the covert and overt security personnel. In practice, every state government has to provide some logistics and other support for these agencies to enable them effectively discharge their duties.

“Since 2015, the state APC government has committed enormous resources to security. The Kaduna State government along with the various local governments have provided cars, pick-ups, motorcycles, bullet-proof vests, station buildings, operating bases and other support for the security agencies in the state. The reality of the security situation today is that it has become a joint responsibility of the Federal Government and the state government. We do our part without hesitation because it is in the vital interest of our people,” he said.

El-Rufai noted the reduction in inter-communal tensions and urged communities to build on this to entrench a reign of peace and concord.

He lamented that while communal tensions appeared to be ebbing, banditry and kidnapping continued to menace the communities and highways, saying that intense efforts were being made to address these challenges, including extensive security deployments and operations to contain and neutralise the criminal elements that were perpetrating the mayhem.

“We cannot relent in tackling criminals who seek to make our communities and highways unsafe. Aside from boots on the ground, we have acquired and put at the disposal of the security agencies, technology that can assist the state to fight back and re-assert its authority. We have also established the Ministry of Internal Security and Home Affairs to focus and coordinate our efforts and cooperation with the security agencies.

“We will continue to devote the necessary resources to address our security challenges and support the agencies that are stationed in our state. As we combat banditry, I urge all residents of Kaduna State to stand together, support our security agencies and report all suspicious characters and activities,” he said.