Photos: Massive losses, weeping as Balogun Market up in flames 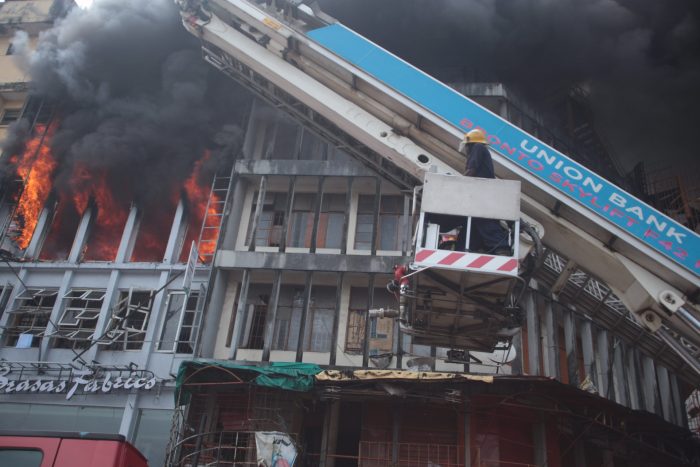 Goods worth millions of naira have been destroyed as fire razed the popular Balogun Market on Lagos Island, Lagos, Southwest Nigeria.

There was weeping as the fire destroyed shops, with thick smoke billowing in the sky.

Huge crowd thronged the arena, slowing down fire service officials and others from carrying out their duties effectively.

Helpless traders watched in awe as their investments went up in flames.

The epi-centre of the fire was a three-storey building, housing lock-up shops.

Despite the valiant efforts by the LASEMA team and other responders, the fire has not abated as at 3:51pm.

A LASEMA’s spokesman, Nosa Okunbor said emergency responders were on top of the situation as the fire which has affected almost every section of the building is at risk of spreading to other buildings next to it due to proximity and closeness.

“It is a situation which presented peculiar difficulties to responders to access the source of the fire in order to effectively put it out on time. Despite obstacles of inaccessibility via roads and set backs, as all the affected buildings are continuously built together in a conjoined manner, the combined efforts of LASEMA Response Team, Lagos State Fire Service, UBA Fire Service and Federal Fire Service are on ground with the DG/CEO LASEMA, Dr. Olufemi Oke-Osanyintolu, mustering and marshalling all necessary equipment and manpower in battling the raging fire,” he said.

“So far there are no casualties, no fatalities and no injuries. Also, there’s been nobody trapped in any of the commercial buildings. Recovery operations still ongoing with the Skylight Fighter Truck fully activated and deployed to aid swift recovery, as dampening commences,” he added.