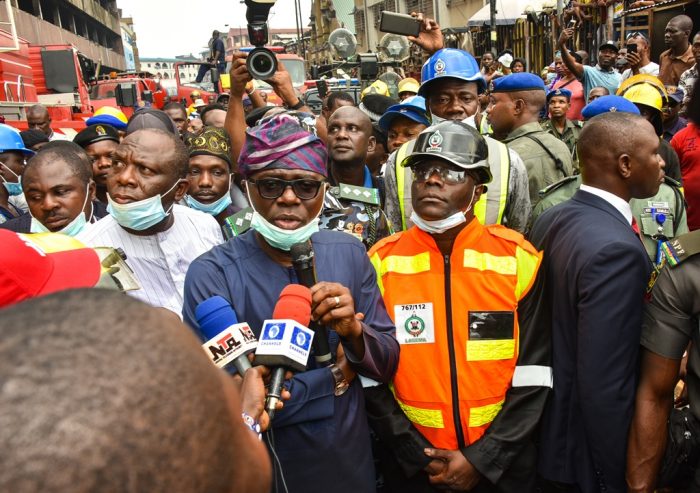 The governor said his administration would begin the Lagos Island regeneration plan next year and that families who owned properties must cooperate with government, saying that weak buildings would be taken down during the regeneration.

Sanwo-Olu, who was saddened by the fire outbreak, said the lessons learnt was that “we should stop storing generator and fossil fuels on penthouses and rooftops.”

He commended all emergency responders, saying they responded swiftly to the fire that broke out 24 hours ago.

The governor, after thanking the people for their support, also solicited their assistance, urging property and store owners to give way to responders to do their work.

Further, the Governor stated that full integrity tests would be carried out on buildings on the left and right sides of number 43, Martins Street that got burnt on Tuesday.

“Plans for the regeneration of Lagos Island are already perfected and that implementation will commence next year. Families that own properties on the Island must be prepared to support government’s efforts on regeneration.

“Government will soon start a conversation on how to commence and proceed. Lagos Island is dominated by buildings of over a century. Those weakened by old age will be pulled down during the regeneration,” he said.

He said government would commence the construction of Oluwole phase II soon and that government would build modern market to ensure that commerce began at an even higher scale with a better organized and modern way of transacting businesses.

Sanwo-Olu commiserated  with the traders on their losses and means of livelihoods, which he assured would only be for a short time.

The Governor also stated that government would do an enumeration of the traders, businesses, and property owners, for a possible compensation.

Sanwo-Olu restated the need for the people to desist from storing fossil fuels, saying that the government was working with the two DISCOS in Lagos to further enhance supply of regular electricity power to the Island.