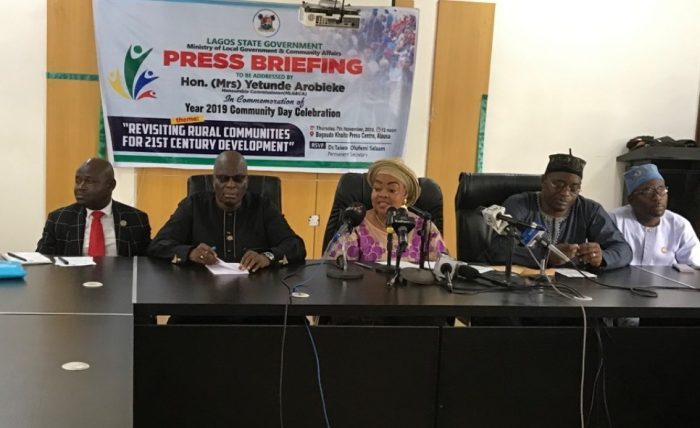 Commissioner for Local Government and Community Affairs, Mrs Yetunde Arobieke Briefing the press. With her are oher top government officials.

The Lagos State Government has read the riot act to some corrupt Community Development Associations, CDAs, in the state over extortion and undue harassment of members of the community.

Commissioner for Local Government and Community Affairs, Mrs Yetunde Arobieke, who read the riot act on Thursday at a news conference to herald this year’s Community Day celebration in Alausa, Ikeja, Lagos, said she would not hide away from the fact that some cases had been brought to her office over CDAs’ extortion and harassment of members of the community or engaging in lawless activities.

She said some CDA members had gone to the extent of arresting landlords, warning that such arbitrariness must stop and unacceptable as government had zero tolerance to this kind of devious behaviour.

“We don’t want the action of the CDAs to make people cast aspersion on this administration. They should be friendly with the people, but people should pay their dues. In case where you pay your dues and the CDAs did not use it for the projects, you can report to us, we don’t want extortion, and arbitrariness,”she said.

On the Community Day, Arobieke said the celebration would be in line with the T.H.E.M.E.S. agenda of the Governor Babajide Sanwo-Olu’s administration.

She said the celebration would begin on Friday with Jumat Service at Central Mosque, Alausa; Health walk and talk on Saturday; visitis to social institutions on Tuesday, while the grand finale would hold on Thursday, 14 November at the Police College Parade Ground, Oba Akinjobi Way, Ikeja and a thanksgiving service at the at Chapel of Christ the Light, Alausa on Sunday.

“Mr. Babajide Olusola Sanwo-Olu, Governor of Lagos State is expected to be the Special Guest of Honour with other government functionaries, members of the State House of Assembly, Chairmen of Local Government Councils and LCDAs, members of the Community Advisory Councils.

“Prizes will be presented to the CDAs that emerge as winners during the Project Assessment across the 20 LGAs and 37 LCDAs in the state by the members of the Assessment Committee,” she disclosed.

Arobieke said Sanwo-Olu had approved the celebration for over 3,900 CDAs across the state.