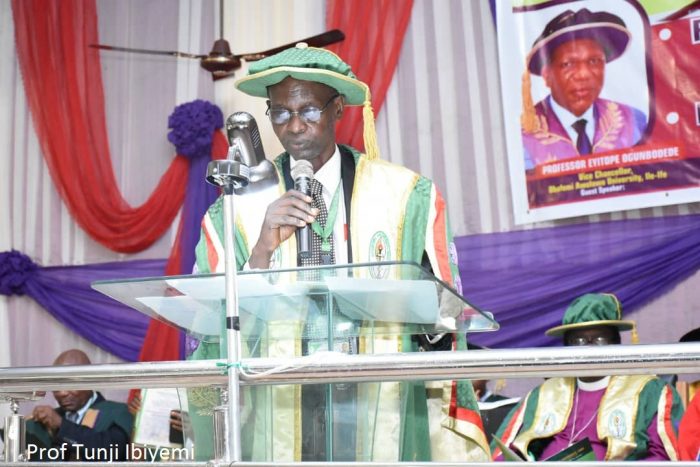 The News Agency of Nigeria (NAN) reports that the university held its eighth and ninth convocation ceremonies on Saturday at the institution’s campus.

Although Jolapamo said that the journey was tough, she, however, added that she was able to navigate through perseverance and determination.

She noted that she did not mind the societal norm but kept fighting with interest and zeal in order to be a change agent in the society.

Jolapamo stated that she was confident in the direction of the university’s dream and lived to uphold its motto.

She, therefore, urged her colleagues to channel all they had learnt to adding value to themselves, their immediate environment and the country at large.

Jolapamo appreciated the institution’s management for imparting in the graduands wealth of expertise in various areas of life, pledging to be a good ambassador of the university.

Speaking at the occasion, Sen. Bode Olajumoke, the immediate past Chancellor of the university, called for a review of the policy which discriminated against and excluded private universities from financial assistance by both the federal and state governments.

According to him, graduates of private universities are also making impacts on the economy of the country, hence the need to consider them during their academic pursuits.

“Why must they be discriminated against? The federal government, particularly the National Assembly must do something about this,” he said.

NAN reports that Olajumoke, who stepped down as the chancellor of the school after seven years in office, was succeeded by Hon. Yakubu Dogara, the immediate past Speaker of House of Representatives.

Dogara said that before accepting the chancellorship, he had perused the vision and mission of the university as well as its history since it was established 11 years ago.

He said that he was impressed with the university’s vision and mission, pledging to join hands with other stakeholders in lifting its banner of greatness by raising the bar of academic excellence for the benefit of humanity.

The former speaker congratulated the graduands and implored them to utilise the genius in them and be patriotic to the country, saying that Nigeria was in dire need of true patriots.

He also congratulated all the awardees, saying that the honour bestowed on them was in recognition of their academic excellence, adding that it was a call for greater service to their fatherland.

The institution’s Vice Chancellor, Prof. Tunji Ibiyemi, said that the university started in 2008, with eight undergraduate programmes in two colleges.

Ibiyemi added that the university was currently running 22 academic programmes, while the number of colleges had risen to four.

He noted that the university got approval for running postgraduate studies in the 2017/2018 academic session in Accounting, Business Administration and Computer Science.

The vice chancellor said that the institution had admitted 13 sets and graduated nine sets of undergraduates.

Ibiyemi said that the first set of postgraduate graduands, numbering 48, would be awarded of Master of Science degrees.

According to NAN, Dogara, Bishop Matthew Kukah, the Catholic Diocese of Sokoto, Mrs Olusola Momoh, the Vice-Chairman of Channels Media Group and Gov. Aminu Tambuwal of Sokoto State were awarded honourary doctorate degrees by the university.