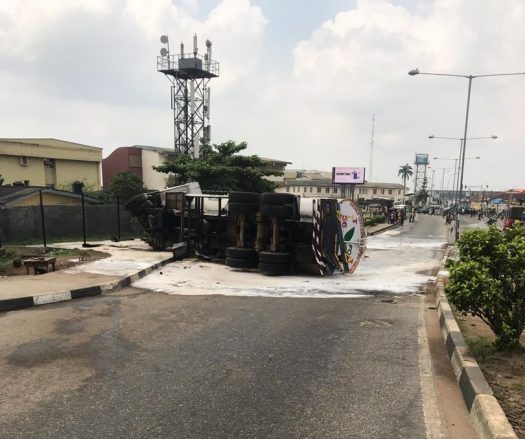 A major disaster has been averted at the Lagos Airport Road as a tanker loaded with 33,000 litres of Petroleum products fell and spilt its contents.

No loss of life was recorded at incident scene with LASEMA’s heavy-duty equipment deployed for quick recovery to prevent secondary incidents.

Nosa Okunbor, LASEMA’s spokesman said part of the deployment was an empty tanker and pumping machine for transloading with super metro in waiting for recovery of the vehicle after transloading was completed.

He said LASEMA, Lagos State Fire Service officers were available and involved in ongoing blanketing of the entire area.

In a similar development, LASEMA is recovering another fallen oil tanker along the Old Abeokuta Motor Road, Agege.

The Agege fallen tanker is laden with 33,000 litres of Automatic Gas Oil, AGO, (Diesel) which fell off its truck head sideways while driving along the Nigeria Postal Service, Agege.

The impact of the fallen tanker resulted in the spillage of its contents with the resultant blanketing at incident scene ongoing while transloading process is also ongoing.

“However, to ensure safety and adequate operational space in compliance with international best practices, the entire incident area has been condoned off,” Okunbor said.

In a related incident, a truck conveying a 40ft fully loaded container involved in an accident at Alapere inwards Ketu is also being recovered by LASEMA.