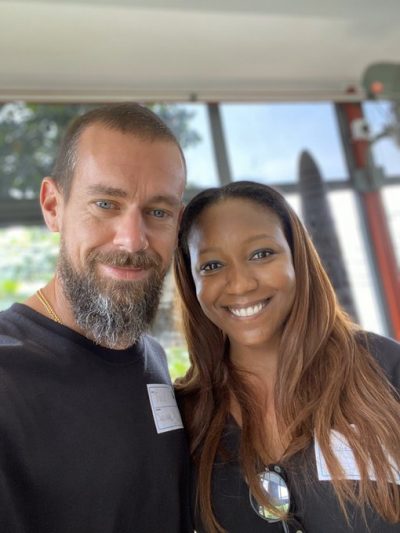 Co-Founder and CEO of Twitter , Jack Dorsey, has left Nigeria after four days of visit to Lagos and Abuja. Mr Dorsey aptly announced his departure on Monday, of course via Twitter.

In another tweet, he thanked his hosts and expressed the hope ‘to be back soon’.

During his visit, part of his listening and learning tour across Africa, Dorsey interacted at several fora with Nigeria’s growing tribe of techies and visited Nigeria’s former finance minister, Ngozi Okonjo-Iweala, who is now on the board of the company.

With Okonjo-Iweala, Dorsey also interacted with some young artists in Lagos, whose works he showed on his handle in several tweets.

Dorsey also visited University of Lagos, where he met with students and the Vice-Chancellor Oluwatoyin Temitayo Ogundipe, a professor of botany.

At one of his sessions organised by Techpoint, Dorsey ran into a Nigerian app developer, Dara Oladosu, a.k.a dara_tobi, who had developed an application that can capture reactions to a tweet. Dara was offered an automatic job with Twitter.

Dorsey also visited Art Cafe, where he had a morning of conversations with incredible Nigerian builders.

He visited Andela too. At every turn, Dorsey made tweets of all his encounters in Nigeria.

The visit was Dorsey’s first to Africa’s most populous country. He is scheduled to visit Ghana, Ethiopia, and South Africa this month.