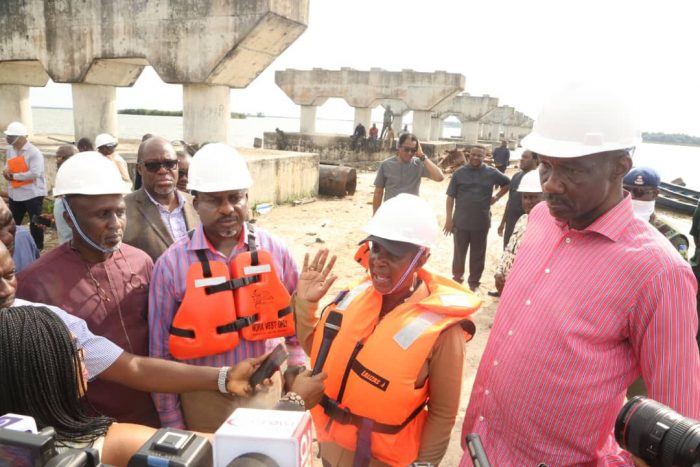 Nunieh, who announced this during an inspection of NDDC projects in Rivers State, stated that the 4.7-kilometre road and bridge would be fast-tracked to ensure that the project was completed by the end of January 2020.

Nunieh said that the NDDC Interim Management Committee would use the project to demonstrate that the Buhari administration cared for people who live in the rural communities, noting: “Mr. President is very determined to take development to the rural communities. That is why he gave us the mandate to reach out to the grassroots.”

The NDDC boss remarked that as an interventionist agency, the Commission would endeavor to leave its footprints on villages spread across the nine Niger Delta states, working in collaboration with the state governments.

Giving her impressions on the Kaa-Ataba Bridge, Nunieh said she was delighted that the project, which was awarded in 2009 and appeared neglected, had been revived. She noted: “The contractor has returned to site and we will complete it to give the communities in Andoni access to modern facilities in other parts of Rivers State.”

Nunieh expressed satisfaction with the performance of the contractor, whom she noted was an indigene of one of the communities in the area. “Many other contractors have equally gone back to site since we assumed duties,” she said.

According to the Acting Managing Director, when the road and bridge was completed, many people from the area would be going to work from their villages. She said that some of the communities were important in their own rights, citing Oyorokoto, which she described as one of the largest fishing ports in the region.

The NDDC team had earlier inspected on-going work at the 13-floor permanent headquarters building of the Commission at the Eastern By-Pass, Port Harcourt. Nunieh expressed satisfaction with the quality of work at the site, describing the project as not only commendable but a testimony to the commitment of the NDDC to deliver quality projects.

She said further: “I am impressed that work is going on according to plans. We are just going to make a few changes and amendments. For instance, we will change the cladding on the outer walls because it no longer meets international best practices.”

The Acting Executive Director, Projects, Dr Ojougboh also certified the quality of work at the headquarters building, declaring: “It is one of the big ticket projects that we are determined to deliver within a very short time.

“Our mandate is clear and we are determined to deliver on impactful projects. We will encourage the contractors to do their work properly.”