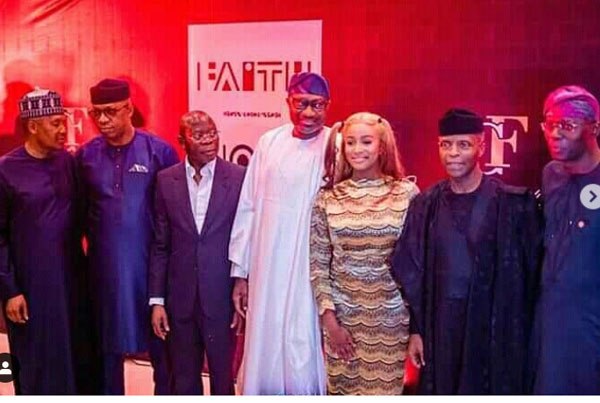 Vice President of Nigeria, Prof. Yemi Osinbajo commended the generousity of the billionaire businessman, Femi Otedola who donated N5 billion at the launch of the Cuppy Foundation which held at the Congress Hall of the Transcorp Hilton in Abuja last night.

Osinbajo said the donation to the Save the Children Foundation, is the single largest donation to philanthropy in the country.

Cuppy Foundation which is owned by DJ Cuppy, daughter of Femi Otedola, is working with the Save the Children Foundation, to bring succour to children in the North East. DJ Cuppy is a board ambassador for Save the Children and a member of the organisation’s Africa Advisory Board.

The Vice President was the Special Guest of Honor at the launch, said no one would ever remember the number of houses, or cash that one has, but the impact one made. According to the Vice President, the likes of Bill Gate, Dangote and now Femi Otedola, understand the importance of living an impactful life and that is why they have turned their wealth and resources to help people and solve huge problems.

He commended Otedola for donating the huge amount, adding that the kind gesture by the business mogul had further demonstrated his commitment to the poor and less privileged in the society.

He also thanked DJ Cuppy for spearheading the initiative, saying she was making an impact in a very important way.