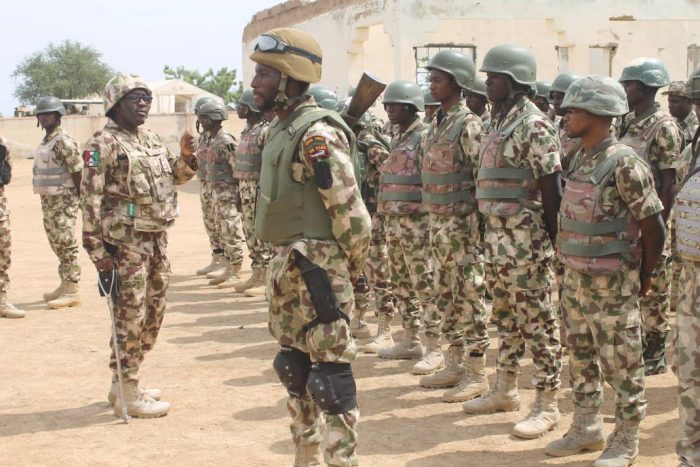 Troops of the 82 Division of the Nigerian Army have arrested 36 suspected criminals within 12 days of its newly introduced Exercise Atilogwu Udo 1 in the southeast geopolitical zone.

Col. Aliyu Yusuf, Deputy Director, Public Relations of the Division made the disclosure in a statement in Enugu while enumerating the achievements of the exercise.

Yusuf said the troops of Sector 3 on Nov. 8 arrested one Okechukwu Emmanuel with five jerricans filled with alleged illegally refined AGO packed in his Mercedes Benz car.

“On Nov. 6, our troop in conjunction with the police and other security agencies conducted raid operation in suspected illegal drug peddlers’ hideouts at Amansea, Kwata and Nino Okpuno in Awka North LGA of Anambra.

“Troops of Sector 4 in Onitsha, on Nov 5, arrested a suspected gun runner, Mr Leonard Asogwa; having conducted a search on him and recovered two pump action guns and 25 rounds of cartridges in his possession,’’ he said.

The army spokesman said that on Nov 5, troops of Sector 5 together with other security agencies conducted raid operations in Ajali Forest in Enugu State believed to be one of the known kidnappers’ hideouts.

“ Our own troops succeeded in creating military/paramilitary presence in the area thereby forcing the hoodlums to take to their heels.

“On Nov. 8, two impostors dressed in military camouflage uniform were arrested by Sector 5 Patrol Team; while items recovered from them were several telephone sets, ATM cards of four different banks and a fake military identity card,’’ he said.

Yusuf said that also on Nov. 5, a suspected human trafficker, Uzoma Uzoma, was arrested by troops of sector 2 along Aba-Owerri Road and one of his victims, Mrs. Chinonyerem Nkemakolam, was rescued in the course of the arrest.

“Also, on Nov 6, troops of Sector 2 in collaboration with DSS personnel raided the home of a suspected kidnapper in Osisioma Aba, Abia State; while the suspect escaped but his father who aided his escape was arrested.

“One pump action gun and five live cartridges were found in the house.

The army spokesman revealed that all arrested suspects so far in the ongoing exercise had been duly handed over to the appropriate security agencies for necessary investigations and further actions.

Atilogwu Udo 1, which means Peaceful Dance, started in the South-East and 82 Division Area of Responsibility on Nov. 1 and will end on Dec. 23.