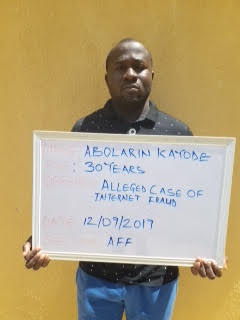 Abolarin Kayode, convicted for internet fraud and other criminal offences.

The Economic and Financial Crimes Commission (EFCC) Ilorin Zonal Office convicted 30-year-old Abolarin Kayode for internet fraud and other criminal offences.
Head of Media & Publicity, Wilson Uwujaren released a press statement that Abolarin was convicted and sentenced to six months imprisonment by Justice Sikiru Oyinloye of the Kwara State High Court, Ilorin.
The defendant after his arraignment, and being confronted by the overwhelming evidence against him, entered into a plea bargain discussion with the prosecution, leading to an amendment of the original charge filed against him.
The amended charge reads ” That you,  Abolarin Kayode on or about 6th day of February 2019, in Ilorin within the jurisdiction of the High Court of Kwara State,  did attempt to cheat by personation,  when you presented yourself as Dawn Groff and sent an email to one Gregory Carter, an American citizen through your acclaimed email ([email protected]), that Budweiser Drink is carrying out Vehicle advertisement programme, a representation you knew to be false and thereby committed an offence contrary to Section 95 of the Penal Code and punishable under section 324 of the same law “
The defendant pleaded guilty to the amended charge.
While reviewing the facts of the case, Olamide Sadiq,  an operative of the Economic and Financial Crimes Commission told the court: “My Lord,  on the 4th of February 2019, based of intelligence reports,  operatives of the Commission arrested the defendant and others at Agric Estate in Ilorin for their involvement in internet scam,  we analysed his phone and laptop and discovered that he created four emails for himself , the email conversations were printed in his presence and discovered that he sent several fraudulent messages to his victims,  that was the circumstances in which I knew the defendant my Lord “
Delivering Judgment, Justice Oyinloye noted that the anti-graft body has been able to link the defendant with the allegations of intent to defraud brought against him. According to the Judge, the evidence of the PW1, Olamide Sadiq who is an operative of the Economic and Financial Crimes Commission was not challenged or controverted.
The Judge also ordered the convict to forfeit his phones, laptops and a Lexus car to the Federal Government of Nigeria. The sentence is without the option of fine.
Tags:   Economic and Financial Crimes Commission (EFCC)