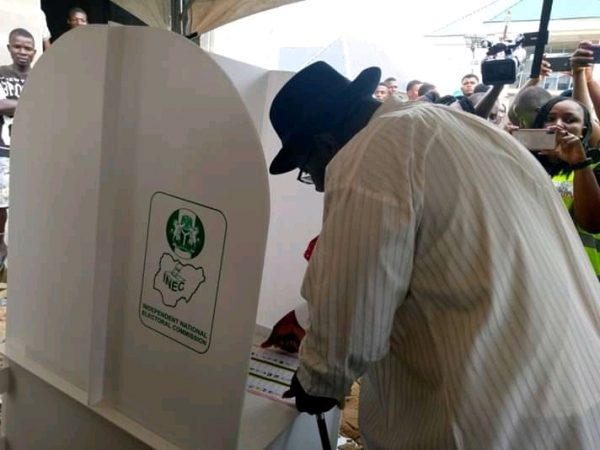 Governor Dickson voting at the poll

Unofficial results filtering out of Bayelsa State are indicative of a major political upset in the state as opposition All Progressives Congress appears to be ahead of the Peoples Democratic Party, at least in the capital.

The PDP has been in control of the state since 1999. Recent shifts in political affiliations by political actors appear set to change the narrative.

In early results, the APC candidate, David Lyon is leading the PDP candidate Duoye Diri.
Results declared in Yenagoa, the capital showed APC in early lead, based on results declared at the polling units.

In Kolo, Ogbia Local Government, former President Goodluck Jonathan’s council area, people out to celebrate the defeat of the Peoples Democratic Party (PDP) in Ward 9, where APC won all the polling units.

Also in Eppie-Atissa in Yenagoa, residents took over the road jubilating over the defeat of the PDP in the area.

The PDP’s brightest spot so far has come from Governor Henry Seriake Dickson’s polling unit 5 in Oriewari ward in Toro-Orua Sagbama LGA where the PDP recorded 1906 votes to defeat the All Progressives Congress, APC with only 5 votes.

Governor Dickson has expressed surprise that the APC is bashing his party at some polling units and he has accused INEC of conniving with APC to rig his PDP out.