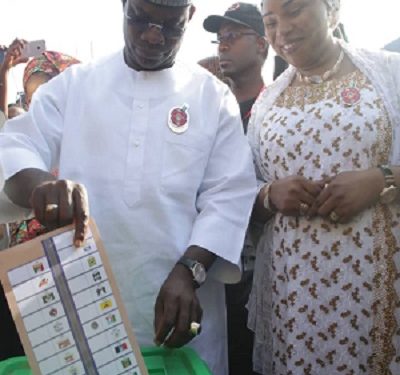 Yahaya Bello and wife cast their ballots in Okene

Governor Yahaya Bello of the All Progressives Congress, fighting for re-election in today’s poll in Kogi state has voted as polling stations opened in many parts.

Bello voted at his Agasa, Okene LG polling unit at Upogoro-Odenku Ward along side his wife at exactly 8.50am.

There are nine polling units in the area with registration Code 11.

The candidate of the People’s Democratic Party Mr Musa Wada, has also voted.

Wada was unable to vote in his polling due to malfunctioning of the card readers, but later voted at another polling unit.

Voting has also begun in Lokoja, the capital.

Voting started at a slow pace in parts of Lokoja due to the late arrival of the Independent National Electoral Commission (INEC) officials and election materials.

Accreditation and voting were yet to start at the polling units at Ansarul Islam Primary School and Lokoja Club House in the city .

INEC personnel began to arrive at the polling units a few minutes to 9a.m. and began to set up the tables and chairs for accreditation to begin.

There was a large turnout of voters at the polling units.

Alert-looking security personnel including policemen, officials from the civil defence, Immigration, and FRSC were seen at the polling units.