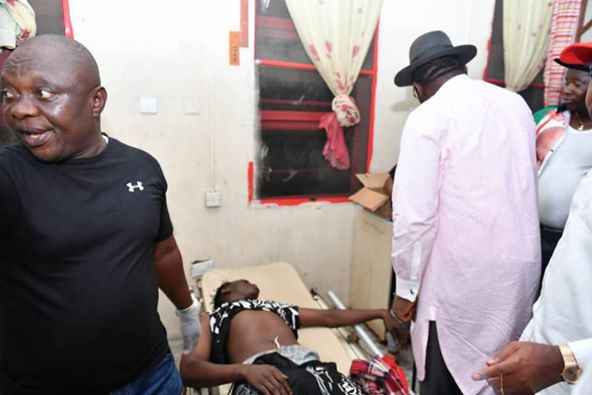 A Nigerian rights group has asked the International Criminal Court (ICC) to investigate whether the violence that characterised the Bayelsa and Kogi elections does not amount to violence against Nigerians and crimes against humanity within the jurisdiction of the ICC.

The group even wants ICC to dig deeper and include previous and persistent crimes of corruption, violence, and killings during elections in Nigeria.

SERAP urged Ms Bensouda: “to push for those suspected to be responsible for these crimes, mostly security officials, officials of the two main political parties, the All Progressives Congress (APC) and the Peoples Democratic Party (PDP), and other actors who contributed to the corruption, violence and killings during the elections in Bayelsa and Kogi states, and are therefore complicit in the crimes, to be tried by the ICC.”

In the petition signed by SERAP deputy director Kolawole Oluwadare, the organization said: “The events in the Bayelsa and Kogi elections suggest criminal conduct within the jurisdiction of the ICC. If the results of the preliminary investigation suggest that further investigation is warranted, the ICC should work with Nigerian anti-corruption agencies on the matter. Election-related corruption and violence are not just minor infractions, they suggest serious crimes against Nigerians, in particular, crimes against humanity.”

“In the ICC case on Kenyan election violence, the culture of impunity was considered one reason why violence had been ‘normalised’ as a means of political struggle. We therefore urge you to investigate allegations of corruption, violence and killings in Bayelsa and Kogi elections, if the ICC is to contribute to preventing escalations in future elections, including the general elections scheduled to hold in 2023.”

“The incidents of bribery and corruption, intimidation and violence witnessed in Bayelsa and Kogi states also strike at the integrity of the democratic process and seriously undermine President Muhammadu Buhari’s oft-expressed commitment to fight corruption and end impunity of perpetrators.”

“The desire for power at all costs by politicians undermines Nigerians’ rights to open, transparent and accountable government that respects human rights and observe the rule of law. Election-related corruption and violence make public officials susceptible to corrupt incentives.”

“Corruption and violence in elections contribute to decline in the quality of the politicians occupying public offices, which in turn lead to bad governance.”

“The Nigerian authorities over the years have been unwilling and/or unable to prosecute suspected perpetrators of election-related corruption, violence and killings, which in turn has promoted the sense of impunity and emboldened those politicians and their accomplices who continue to commit these crimes against the Nigerian people during election periods.”

“Nigeria is a state party to the Rome Statute and deposited its instrument of ratification on 27 September 2001. SERAP therefore urges the ICC to use the example of its intervention in the Kenyan election violence in 2007 and 2008, which led to the ICC prosecution of perpetrators, including government officers, for crimes against humanity.”

“The violent events witnessed in the elections in Bayelsa and Kogi states suggest the lack of political will by the authorities and the Independent National Electoral Commission (INEC) to respect the sanctity and integrity of the electoral system and to apply criminal sanctions to perpetrators of corruption, violence and killings during elections.”

“The events in Bayelsa and Kogi states also suggest the misuse of state resources for party political purposes apparently by the APC and PDP. Corruption and violence-tainted elections invariably produce would-be corrupt public officials, and lead to a vicious circle of corruption, mistrust, impunity, and deny citizens access to public goods and services.”

“The Nigerian authorities and the leadership of the two main parties failed abysmally to ensure an election free of bribery, violence and intimidation in Bayelsa and Kogi states. The ubiquity of corruption and violence in Nigeria’s electoral process has made it very difficult to stop politicians from engaging in grand corruption, thereby contributing to decades of poverty and underdevelopment across the country.”

“The Bayelsa and Kogi elections have denied Nigerians the right to clean elections. The right to a clean elections system will improve the integrity of government institutions, encourage citizens’ participation in the political process, and will promote freedom to a corruption-free Nigeria.”