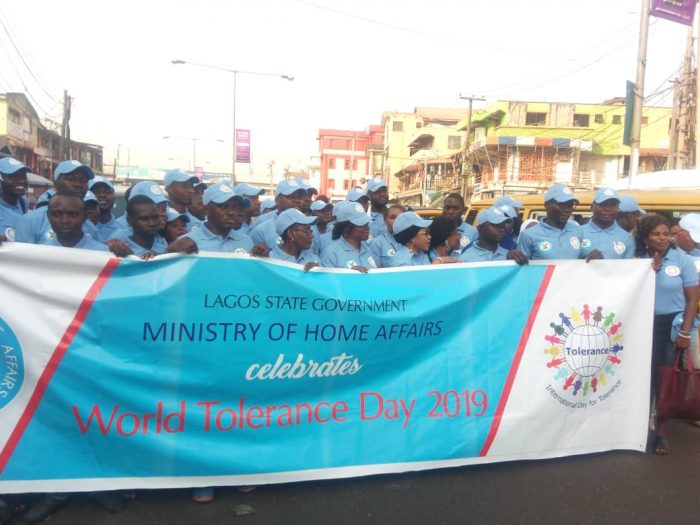 Government officials during the walk

Officials of the Lagos State Ministry of Home Affairs at the weekend staged a walk to commemorate this year’s International Day of Tolerance.

Led by the Commissioner for Home Affairs, Mrs. Uzamat Akinbile-Yussuf, scores of government officials walked from Ikeja under the bridge to the Lagos State Government Secretariat, distributing leaflets and sensitising residents of the state on the need to embrace tolerance.

According to Akinbile-Yussuf, tolerance is an important virtue everyone must imbibe for peaceful co-existence in Lagos and in the country.

She said without tolerance, there would be no peace and no development in the state and in the country at large.

“This is why the United Nations sets 16th of every November each year as International Day of Tolerance. We all have different religious background, we are from different tribes and ethnic groups. We need to tolerate one another. Without tolerance, there will be no peace and development,” she said.

Akinbile-Yussuf said there has been religious tolerance in Lagos and urged residents of the state to continue to tolerate one another.

She said that Lagos, being a cosmopolitan state and home to people of different backgrounds, underscored the need for tolerance during interpersonal relationships.

”It is only in Lagos State that you will have a Muslim marry a Christian and they will live harmoniously without conflict,” Akinbile-Yussuf said.