How Gov. Dickson worked for APC in Bayelsa: Sylva 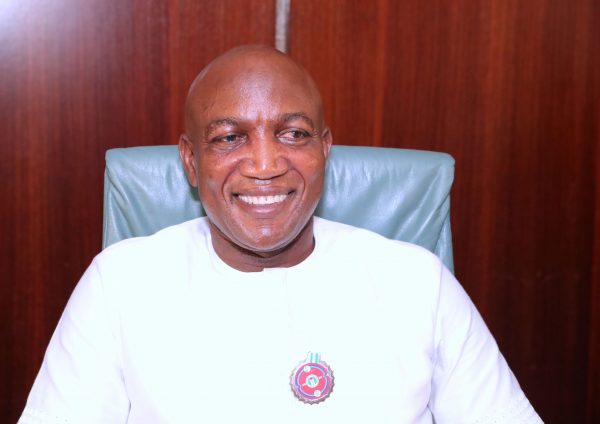 David Lyon: End of the road in reclaiming Bayelsa mandate

The Minister of State for Petroleum Resources, Mr Timipreye Sylva has `thanked’ Gov. Seriake Dickson of Bayelsa for making it much easier for the governorship candidate of the All Progressives Congress (APC), David Lyon, to win the Nov. 16 election.

He disclosed this after presenting the Bayelsa Governor-elect, David Lyon, to President Muhammadu Buhari at the Presidential Villa, Abuja on Monday.

Sylva attributed the electoral victory of the APC candidate to what he described as “poor performance by the Bayelsa State government”.

“It’s been a very hectic week but I will like to bring in this Eritrean proverb, that if you marry a wife very well, you will be blessed with another wife.

“Gov. Dickson, unfortunately made our job very easy because he married the wife very badly. Of course this proverb pre-supposes that if you marry a wife badly, you will not get another wife.

“So he did not marry the state very well, so the state roundly rejected him.

“Like it’s been said earlier, we had a good candidate and when you have a good product it’s very easy to sell it. So, we went round and sold this good to Bayelsans and the result was an overwhelming success.

“We are happy with this victory because for us it is very significant. This gives our party a footprint in the Niger Delta, which is very key to us. It gives us more of a national outlook, we have always been a national party but this gives us even a bigger national outlook.’’

Gov. Abubakar Atiku Bagudu of Kebbi, who alongside his Jigawa counterpart Badaru Abubakar, presented Lyon to the president, commended Buhari for his consistent preaching of fair and transparent elections in the country.

“Many people worked hard in making this happen, most importantly, Mr President, who has always shown the party that win or lose, we should aim for free, transparent and fair elections.

“Because, that is what will guarantee peace, confer legitimacy and support for elected persons to proudly execute the mandate that they are given. And in Bayelsa we have seen a demonstration of that.

“Everyone is talking about how free, transparent and fair the elections were.

Abubakar, who is the chairman of All Progressives Congress Governors’ Forum, said the APC victory in Bayelsa was well received by almost all citizens of the state.

“We were in Bayelsa for over 72 hours. We didn’t see a tyre burning, we didn’t see people running, we didn’t hear a gunshot, everyone was celebrating in all the areas we passed, which shows the acceptance of our candidate, our party and the process itself.

“It is equally noteworthy that Bayelsa is a home of a former president of Nigeria and this election won by a party different from the one he belongs, has been accepted by all including people around him.

“And so far, from what we hear, he is also happy with the outcome irrespective of the difference in the party, which is an indication of the transparency of the process.’’

The National Chairman of the APC, Comrade Adams Oshiohmole, who also spoke at the event, said apart from presenting the Gov-elect to the president, he also thanked him for insisting that the elections must be conducted in a peaceful and transparent atmosphere.

“As the President and our father, he has a brand new baby boy who will be sworn- in on Valentine Day February 14, 2020, as governor of Bayelsa State.

“We thanked the president for his fatherly role and he insisted that we must ensure that while we are determined to win the election, that we must play by the rule and ensure that the process is transparent.

“Above all the president has always been concerned about peaceful election and we were proud to inform him that besides very isolated cases of ballot box snatching, the election in Bayelsa can be described as the most peaceful.

“I believe since 1999, you as very seasoned journalists who have covered elections in Bayelsa in the past, you will agree that this is the only time we can say the election is truly transparent and peaceful.

“Again, our candidate attracted support across the political divide when you see territories and communities where his victory was being celebrated you will agree that not only did he have the support of the APC family, he had support beyond the APC family,’’ he added.

The Independent National Electoral Commission on Monday declared Lyon as the winner of the governorship election in Bayelsa after polling 352,552 votes.