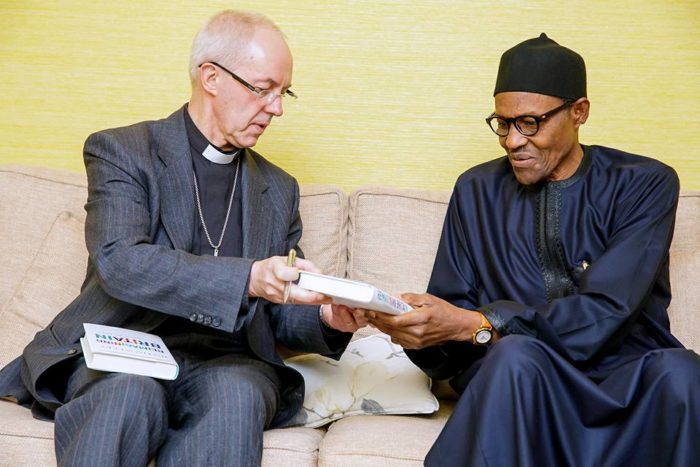 President Buhari receives in audience Archbishop of Canterbury and High Commissioner of Nigeria to United Kingdom in London.

The Archbishop of Canterbury, Most Revd Justin Portal Welby, has responded to an open letter by Socio-Economic Rights and Accountability Project, (SERAP) urging him to use his good offices and leadership and his “friendship with President Muhammadu Buhari to prevail on him to obey court orders most recently involving activists Omoyele Sowore and Olawale Bakare, who remain in arbitrary detention despite a court order for their release.”

This development was disclosed on Tuesday in a press release by SERAP deputy director Kolawole Oluwadare.

SERAP had in the letter to Archbishop Welby expressed “serious concerns about the disturbing trends by state governments and federal government to use the court as a tool to suppress citizens’ human rights.”

Responding on behalf of the Archbishop through an email last night, Dominic Goodall, the Chief Correspondence Officer at the Lambeth Palace, said: “Thank you for your recent letter. Much as he would like to, the Archbishop is unable to respond personally in detail, so I have been asked to reply to you on his behalf.”

Deputy Director Oluwadare, therefore, said SERAP was delighted that its letter and the concerns raised had caught the attention of the Archbishop.

“Given his public record for justice and human rights, we have absolutely no doubt that he will prevail on President Buhari to obey not just the court order for the release of Sowore and Bakare but all court orders”, he said.

SERAP had in the letter dated 11 November 2019 said: “We believe you can use your leadership position and influence to persuade President Buhari to promote the rule of law in words and in action by obeying all court orders including the order for the releasing of Mr Sowore and Mr Bakare from arbitrary detention.”

SERAP also said, “As the senior bishop and principal leader of the Church of England, the symbolic head of the worldwide Anglican Communion, we believe you can reaffirm your belief in justice, rule of law and the basic human rights of all people by speaking out with a strong voice against the repeated disobedience of court orders and the implicitly lack of respect by the government for the integrity and authority of the Nigerian judiciary.”