Almajiris will constitute security challenge if not educated - Lawan 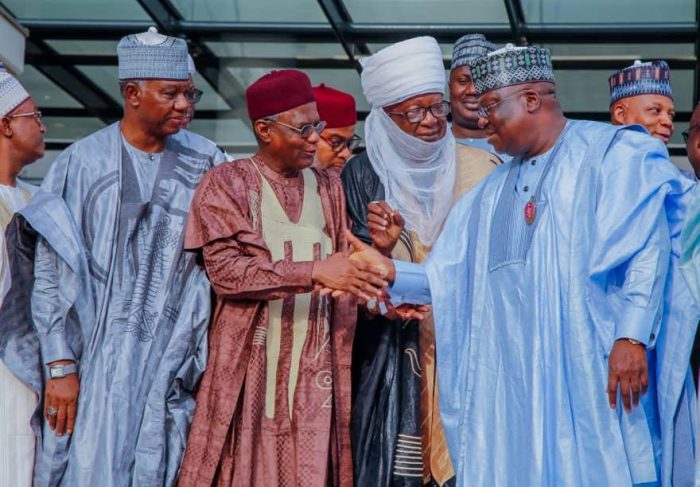 President of the Senate, Ahmad Ibrahim Lawan, in a group photograph with members of the Arewa Consultative Forum (ACF) and some senators, during a courtesy visit by ACF to the Senate President on Wednesday, November 20, 2019

President of the Senate, Ahmad Lawan on Wednesday said Almajiris in Northern Nigeria will constitute security challenges to the nation if they are not educated.

He also expressed concerns about the out of school children in the country.

Lawan told a delegation of Arewa Consultative Forum which paid him a courtesy visit that it is not an enviable record that Nigeria has the world highest figure of out of school children.

“We are worried and concerned with educational deterioration in many parts of the country and especially the out of school children who numbered about 11 million, some will tell you 14 million.

“The true thing is that nobody knows the figure. The figure could be much more than that because we are poor with our statistics.

“Majority of this out of school children are in northern part of Nigeria. And this is the highest in the world. It is not an enviable position.

“These out of school children are our responsibility. We owe them, because it is not a privilege, it is their right to be in school. We shouldn’t allow them to continue to stray in the street.

“Whether we call them almajiri or not, these are the leaders of tomorrow and there is going to be a widening gap if such people are left uneducated. They will also contribute security challenge to us if they have not already,” Lawan said.

“Before, the north was safer than many parts of the country. Today the north is worse in terms of security. So we have to work hard with the executive arms of government to deal with the security challenges as much as we can,” Lawan said.

The Senate President advanced reasons for the plans by the upper legislative chamber to hold roundtable conferences on power, solid minerals and agriculture sub sectors.

Lawan said the power sector has witnessed a lot of reforms the climax of which was the privatization of the Generation Companies(GENCOs) and Distribution Companies(DISCOs).

“But I think the time has come for us to review what the GENCOs and DISCOs have been able to do since those operators took over from the Federal government of Nigeria.

“Of course, everybody agrees that they have not done very well. We cannot continue to be lamenting and do nothing.

“So we think that we should hold a roundtable Conference and tell ourselves the truth. This thing is not working. We can’t go on like this.

“Without power, we can’t develop this country at all. The insecurity can be related to unemployment among our youths. With improved power supply, definitely there will be more employment opportunity for our youth.

“So we are going to hold that roundtable Conference and we believe that at the end of the day, we should come up with ways and means and ideas on how to move forward.

“This we are not going to do alone. We have to involve the executive arm of government and I’m happy that the President particularly is feeling the same way,” Lawan said.

On Agriculture, the Senate President said there is need for the government to come up with a roadmap and strategy clearly defined targets between now and 2023.

The Senate President also said there is need for a clearly defined policy on solid minerals sub-sector.

“We have to have a policy of supporting truly committed companies which want to do mining.

We believe that if Nigeria relies on solid minerals alone, we can make this country better.

“So we are going to look into the solid minerals sub sector and see how we can come with legislation that will support it, ” Lawan said.

Earlier, the ACF chairman, Alhaji Musa Liman Kwande told the Senate President that the forum will appreciate it if the railway and road network projects are simultaneously pursued from the North and South to assuage the fears of projects being abandoned after this administration.

He also sought support for the ACF 20th anniversary coming up in March 2020.