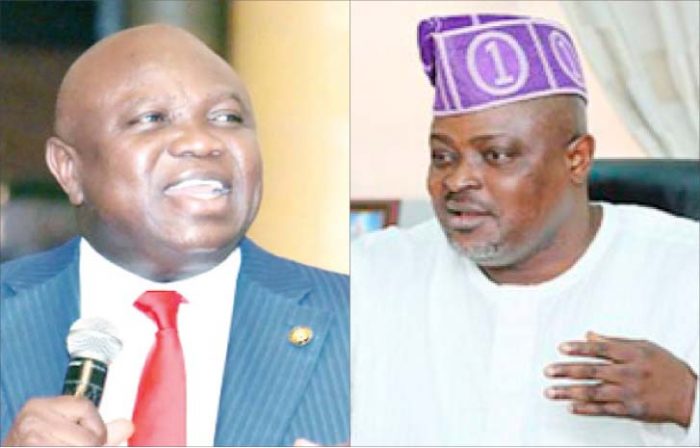 Lawmakers probing former Gov. Akinwunmi Ambode of Lagos over the purchase of 820 buses as part of the Bus Reform Project of the state, on Wednesday said the suit he filed against them was incompetent.

The lawmakers, represented by Mr Lawal Pedro (SAN), also told an Ikeja High Court that it did not have the jurisdiction to hear the suit.

They are also opposing the injunction Ambode seeks to restrain them from probing him.

“We have filed a notice of preliminary objection, highlighting the incompetence of this suit.

“We are as well challenging the jurisdiction of the court to entertain the suit.

“We also filed a counter-affidavit and a written address for the claimant’s motion for an interlocutory injunction,’’ Pedro said.

He noted that Mr Tayo Oyetibo, counsel to Ambode, filed a written reply on points of law to the lawmakers’ motion, challenging the injunction, as well as a written address in opposition to the preliminary objection.

Responding, Oyetibo confirmed receiving all the processes served on the claimant by the respondents.

He said that Ambode had also responded to the processes.

“We have, however, not been served with any defence my lord, as there is nothing to defend,’’ Oyetibo said.

Ambode had instituted the civil suit against the state House of Assembly, its Speaker, Mr Mudashiru Obasa, and the House Clerk, Mr A.A. Sanni.

Other respondents to the suit are Mr Fatai Mojeed, the Chairman of the Ad-hoc Committee set up by the House to probe the procurement of the buses, and eight members of the committee.

Ambode seeks an injunction restraining the lawmakers from compelling him to appear before them pursuant to a resolution passed by House of Assembly on Aug. 27 as well as any other resolution passed in respect of the probe.

The former governor seeks a second injunction restraining the respondents from representing or continuing to represent to the public that he procured 820 buses in breach of budgetary approval.

The claimant wants a court declaration that the powers of the National Assembly under Sections 103, 128 and 129 of the 1999 Constitution, as amended, does not include the power to indict him as contemplated by Sections 66(1)(h), 137(1)i and 182(1) I of the Constitution.

Ambode also seeks a court declaration that the provisions of Sections 1, 2, 3, 4, 8 and 9 of the Appropriation Law of Lagos State, 2018, requiring the approval of the House of Assembly before certain expenditure of money are incurred by the executive arm of the state government is not in accordance with constitutional provisions.