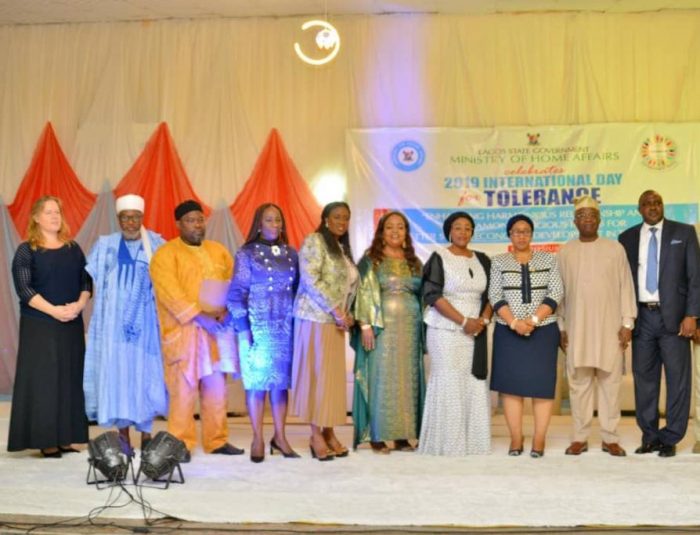 Lagos State Governor, Babajide Sanwo-Olu has charged Nigerians to embrace tolerance in a bid to enhance national unity and diversity.

Speaking at the 2019 International Day for Tolerance, held in Ikeja, Lagos, Southwest Nigeria on Tuesday, Sanwo-Olu charged stakeholders to rub minds together on some deeper ramification of national unity, saying that Nigerians should be proud of their cultural diversity and great accomplishment even in civilisation.

“Our nation is the owner of principles and ideals which command great respect in the world. These principles and ideals varies from our deep respect for human life, our respect for individual peculiarities and choices, our generally democratic tendencies, our culture of religious accommodation and harmony and our deep sense of hospitality to strangers and foreigners,” said Sanwo-Olu who was represented by the wife of the Deputy Governor, Oluremi Hamzat.

According to him, tolerance was neither indulgence nor indifference, but the respect and appreciation of the rich variety of world cultures, forms of expression and ways of being human, stressing that “it is a conscious act of showing respect for other beliefs, culture and ways of life as long as it does not affect the basic right of others.”

The governor stated that Lagos, despite being the most cosmopolitan state that housed every tribe and religion in Nigeria, had remained a very peaceful and tolerant state in terms of religion and tribal sentiments.

Sanwo-Olu said this had helped the state’s economy and invariably its socio-economic development, saying that the state had continued to create more enabling environment for more interactions, among all religions.

According to her, tolerance was the only weapon of building peace and combating intolerance in form of racism and discrimination that too often tore societies apart, adding that the government was leaving nothing to chance to sustain and maintain the peaceful co-existence of all Lagosians.

“The government is adequately mobilising the security agents and spending so much on education and enlightenment of the citizen. People should become aware of the link between their behaviour and vicious circle of mistrust and violence in the society.

“The peaceful development being witnessed in Lagos State presently is not by accident. It is due to our tolerance. I hereby implore you all to continue to join hands together with government of Lagos State to promote tolerance for our socio-economic development,” she said.