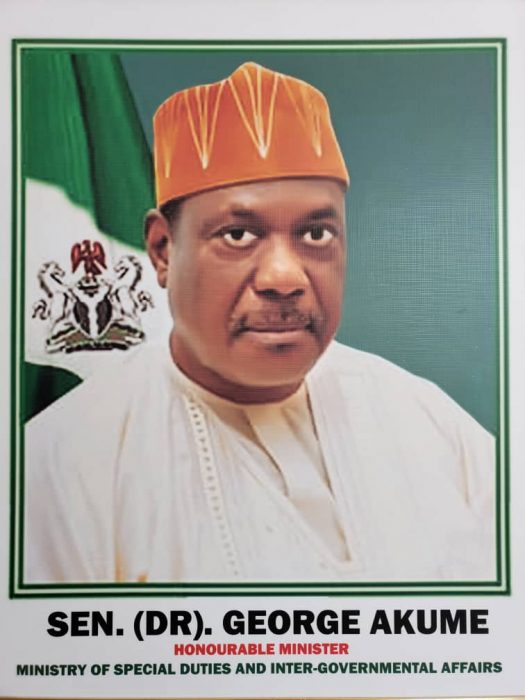 Nigeria’s Minister of Special Duties and Inter-Governmental Affairs, George Akume, has described the National Lottery Regulatory Commission (NLRC) as an agency capable of providing the bulk of revenue for Nigeria, second only to the Nigeria National Petroleum Corporation (NNPC).

Akume, who made the remark during his maiden official visit to the corporate headquarters of the Commission Thursday in Abuja, said he was encouraged by reports he had heard about the Commission and would do everything within his power to support its lofty works.

“I want to say I’m so glad to be here. The welcome I’ve received has been excellent and I thank you all for it. Whether we operate as a ministry or a parastatal, the basic role of government remains the same. Whatever we do as a country or as a nation has to do with the allocation and application of resources and that’s where your Commission comes in to play a pivotal role.

“I’m not an expert in this field but I’m informed and inclined to believe that if what you are doing is properly managed, this Commission has the capacity to contribute meaningfully to the upliftment of our people. President Muhammadu Buhari has made his commitment of lifting over one hundred million Nigerians out of poverty and the poverty line in the next ten years and your Commission is in a position to play a major role.

“If this Commission is properly organized, I believe, and strongly too, that there’s no way you can’t rake in billions and billions of Naira to the coffers of this government. You have told me and others who are experts have also told me that the possibilities here are huge and enormous,” Akume said.

He further challenged the Commission to do more in increasing its revenue for government, adding that Lottery can create a huge revenue base for the country just like the NNPC.

He said: “I challenge you the DG and the board, the management of this Commission to do a lot more. During the briefing I received on my assumption of office from the honourable minister, I was most disappointed at what was accruing to government and I want us to make a difference, a huge difference by the time the budget cycle begins. With the potentials that are here, this Commission has the capacity to be second, only to the NNPC.”

Concerning the challenges listed by the DG, the Minister gave assurances of helping to tackle them, adding that the Commission also had role to play.

“I’ve listened carefully to your challenges- the issue of the central monitoring system is paramount because without that you can’t achieve much. I want to assure you that we would do our best but our best depends on what you’re also doing, and it is very important that you work on this before the end of the year; we know that we have accomplished something because the whole success of the commission depends on this.

“The establishment of a National Game and recovering of massive revenues lost are crucial but I believe they are workable. And I will support this fully. There is also the amendment of the Act; no law is perfect. There’s a procedure you have to go and the earlier you make a draft to me for necessary action, the better. And there’s the issue of your permanent site. You can’t continue to operate from a temporary site because you will discover that you are spending more. I also fully support this. The issues of conflict should not stop you from operating as my office also deals with inter-agency relations,” the former governor of Benue State said.

Earlier, the Director General of the NLRC, Mr. Lanre Gbajabiamila, who was backed by the management of the NLRC, listed some of the milestones recorded by the Commission to include: restructuring for optimal performance and productivity; reassessing and realigning priorities for increased statutory and sustained revenue growth; establishing new operational policies and terms which are focused on regulatory outcomes, as well as challenges/ objectives which include procurement of Lottery Central Monitoring System, establishment of a National Game, Amendment of the National Lottery Act 2005, acquisition of a permanent office structure and jurisdictional conflicts with stategovernments when carrying out their oversight functions.

During the visit, Akume also had a session with the staff of the Commission where he assured them that government had their welfare at heart, and they should reciprocate through hard work and commitment. In the Minister’s entourage were the Permanent Secretary of the Ministry, Directors, aides and other staff.