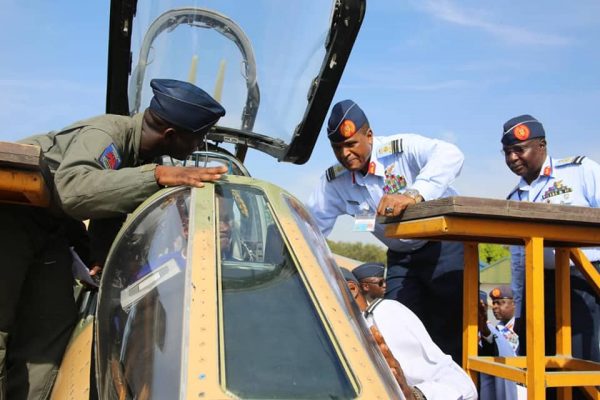 The Chief of the Air Staff (CAS), Air Marshal Sadique Abubakar, says he is pleased with the ongoing in-country Periodic Depot Maintenance (PDM) of some Nigerian Air Force Alpha Jets.

The in- Country PDM is being executed at the 407 Air Combat Training Group (407 ACTG) Kainji, Niger.

A statement on Friday by Air Commodore Ibikunle Daramola, NAF Director of Public Relations and Information, said Abubakar disclosed this while on an inspection visit to assess progress of the PDM as well as other ongoing projects at NAF Base Kainji.

Abubakar said the PDM included significant avionics upgrades that would enhance the effectiveness and efficiency of air operations conducted with the aircraft.

He also expressed delight at the level of work done on the first three Alpha Jets and commended the Commander 407 ACTG as well as the team of NAF engineers and technicians for their hard work, commitment and dedication in ensuring steady progress of the job.

The CAS urged them not to relent in their efforts at ensuring excellent and timely completion of the job.

He said the in-country PDM, would allow the NAF personnel involved in the project to build their capacity to enable them ultimately carry out major aspects of such high-level maintenance activities on their own in the future.

Abubakar urged the personnel to make maximum use of the opportunity to enhance NAF’s self-reliance.

He noted that completion of the in-country PDM would boost the NAF’s Air Power employment capability by increasing the number of Alpha Jet aircraft available for combat operations in the various Theatres of Operation.

Abubakar recalled that a similar life extension maintenance had been carried out recently on three L-39ZA aircraft in Kano, while an in-country PDM was also successfully carried out on a C-130 Hercules aircraft in Lagos, with the PDM of another C-130 also currently ongoing.

He disclosed that reactivation work on another Mi-35P helicopter was also in progress is in Portharcourt.

The air chief said apart from building the capacity of NAF personnel, “these local maintenance efforts had also resulted in huge foreign exchange savings for the Nation.”