Akinrinade on civil war: “Day my dancing partner was shot and my other escapes from death” 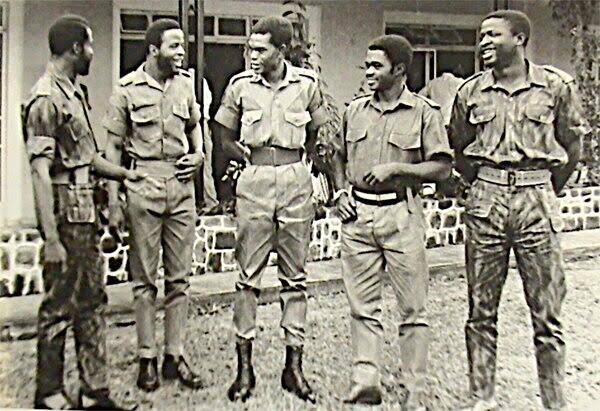 General Alani Akinrinade, a Nigerian Army General, civil war hero and pro democracy fighter who, like many other kindred spirits, spent times at the barricades, has a lot to thank God for at 80. He still stands on his feet, breathing. In other words he, on many occasions, would have died but for luck or Providence or a combination of both.

One of such occasions was when, at the war front, the rank and file liked to let off tension when live bands were brought to play and soldiers were free to dance and make merry. That day, his dancing partner was hit by gun bullets and she died. Perhaps, Akinrinade was in the enemy’s cross hairs. He revealed this to TheNEWS in an interview in his Yakoyo country home recently.

Dancing and merry making at the war front are are a global practice. Many soldiers like to enjoy every minute of their days, for who knows the next set that will end up in body bags? US Navy permits such on their aircraft carriers- those aquatic juggernauts that roam the oceans of the world, telling anyone who cares to listen that America has the capability to balance terror with terror. Russia and France know this happens on their war frigates, so also is the British Admiralty.

Akinrinade narrated what happened: “I was sitting on a sofa with one lady, there was music and I just told the woman, Let’s go and dance, but she wouldn’t answer me. At first, I thought, These civilians are so petrified. Unknown to me, a bullet came into the sitting room, hit her in the head and she died.”

Before then, he sat down with people when he and his men of the 3rd Marine Commando were going to capture Aba, talking about what next to do, because Biafran land mines were, as he put it, very pervasive, going off at every 100 meters. “We were just sitting down when a young soldier who was on the same parapet that we were sitting got shot and he went down. The bullet went to his helmet, but it was the concussion that knocked him down. The bullet did not really hit his head.”

General Akinrinade was also in the same room with another military brass hat, Ayo Ariyo, who had a rocking chair. “He was sitting in the chair. He was our classmate, but he was already a Sergeant in the Army by the time they recruited us. He sat in the chair and we were all sitting together. He just got up and wanted to go to the bathroom. As soon as he got up, he couldn’t have taken two steps away when a bullet hit where his head was on the chair. When he came back, we jokingly said, That bullet was meant for you, bloody idiot! We all laughed about it. That’s the nature of the work.” It could also have been aimed at Akinrinade.

Another anecdote he shared with the magazine is laughable and also shows the vulnerability of African mesmerism in the face of bullets. He narrated: “The only time I ever got hit was on my finger. People could get killed so easily. Felix Onifade was my senior, but over the time the war started, he lost seniority because we had exams and I overtook him. When they now posted him to work under me, he came, we spent the night in my house. We later joined a Navy ship to Bonny. We went out in the morning to show him his new command and then we sat in one trench and I was pointing out something to him. But a bullet hit him there and he died.

“That was his first day. When we got the medics to take off his shirts, we found a small tortoise that was still alive under his chest. That diminished my belief in the potency of charms.”

Even after the war, he was a target. TheNEWS asked him that in January 1984, he was shot by some assassins at Opebi. Why did they want to kill him?

He replied: “I don’t know. I really don’t know. The hoodlums were trying to order me out of my car, but I refused. I said, What the hell is that? So they jumped into my car, took away my brief case and shot me. I don’t think they were assassins—they were hoodlums.”

Read more in the Preface and the marathon interview here.