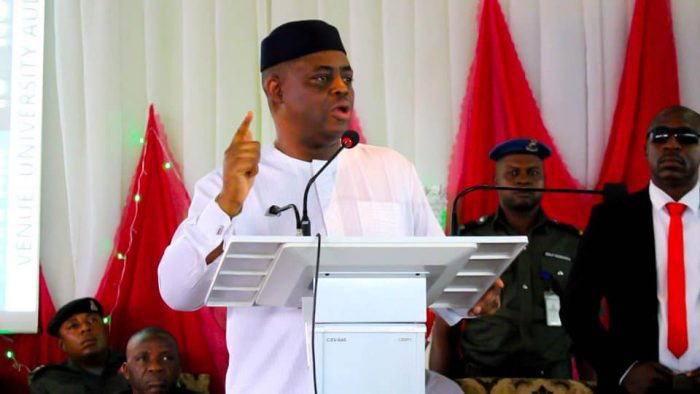 Though, Dr. Nnamdi Azikiwe will forever hold my utmost respect that being at his memorial lecture is a duty I have marked in my every-year diary, I ignored duty calls elsewhere half-way through yesterday’s 8th version of the event to stay till the end because I wanted to listen to Femi Fani-Kayode speak as the main discussant.

And it was hugely worth it!

FFK, as we know him, is a known figure in Nigeria and well beyond. He could be more controversial than popular in some circles but one thing is now very clear – nobody ignores anything he says/writes.

Despite the elegance in delivering the well-researched keynote address by the guest speaker, HE Dr. Ernest Bai Koroma, the former president of Sierra Leone on the topic, ‘Migration And Development In Africa: Patterns, Issues And Challenges,’ FFK digressed to touch deep nerves when he stood to discuss.

Before then, the chairman of the grand event, HE Chief Jim Ifeanyichukwu Nwobo had reminded the audience that filled the auditorium to the brim that age has not done much to reduce his usual charisma and oratory. The former governor of Anambra State went down memory lane to recall how he built UniZik as Anambra State University of Technology and went to Harvard University to bring home Prof Kenneth Dike, who incidentally hailed from Awka, as its first vice chancellor.

As the audience intermittently interrupted with chants of ‘Jim, Jim…’, the Enugu State-born elder statesman extolled the virtues of the great Zik, who he described as a political father who equally did no less for him than a biological father would have done.

The man we know better as Jim turned to look at HE Peter Obi sitting close by and poured encomiums on the immense qualities of the equally former governor of the state, saying emphatically that he knows that the PDP vice presidential candidate would eventually get to where he is headed because he believes the man we fondly call Okwute has all the potentials and moving in the right direction.

In brief speeches, the vice chancellor of the university, Prof Charles Esimone as well as Prof Rita N. Ugokwe-Joseph the Dean of the Faculty of Arts and the Benefactor, Chief Sen Ben Obi …all made welcome addresses.

Also in brief spell, H.E. Dr. Nkem Okeke, the deputy governor of Anambra State, who forever represents Gov Willie Obiano at such intellectual events, welcomed the former president of Sierra Leone as well as others to the event and announced that the state government has set aside Monday 18, November as public holiday in Anambra while all markets will be closed in honour of Zik.

When it eventually got to the turn of FFK, it dawned on me that many people in the hall equally were waiting in anticipation. And I suspected that like me, many must have resisted the pressing demand somewhere else to witness the Osun-born politician perform live.

Needless to highlight any of his statements. Every word he spoke was delivered with firm emphasis. He is a great orator who seems to revel extempore.

He started by saying that even though it is befitting that such great institution was named after the great Zik, that the Southeast, even as of today, are yet to fully appreciate what they had in one of the greatest Africans who ever lived.

He recalled Zik’s relationships with his grandfather and father, and further recalled how the Owelle of Onitsha would have been the premiere of Western region until Chief Obafemi Awolowo and his Action Group fought it.

“Maybe if Zik was allowed to be the premiere of the West in an election he evidently won, Nigeria would not have been suffocating in the nasty tribal hatred of today’s.”

And he went further to say of many efforts the man being celebrated made in trying to unite the entity into a truly one nation with one destiny. FFK recalled how Zik went to Sarduana in the early 60s and told Northern leader, “let us forget our differences…” but Sarduana responded, “let us rather understand our differences…”

“You shouldn’t forget the roles your hero in Dr. Azikiwe played in getting our independence and tirelessly working for our oneness.

“You shouldn’t forget the role your hero Chukwuemeka Odumegwu Ojukwu played by leading you in defense of yourselves from an enemy intent on wiping you out of the surface of the earth in cold blood.

“You shouldn’t ignore the calls of Nnamdi Kanu who is forever my friend and brother.”

FFK continued by remarking that in line with Zik’s call to Sarduana to ‘forget our differences’ that the South easterners forgot the wrongdoings and integrated fully back into Nigeria. That they went back to the states of the North, West and every corner of the country to sojourn, develop the place in marvelling manner.

“Go to Abuja. The South Easterners own majority of the properties there. Go to Lagos.

“Why then are these same people not fully integrated back into the country? Why are there barriers wedged against them in many areas of fully expressing their potentials?

“I have conscience and won’t allow things to continue the way it is. Zik wouldn’t be happy with that. The great man wouldn’t have been happy with a lot of things. There must be real change or we face a catastrophe.”

Almost every sentence he made got applauded while he lamented on the state of the nation and the ill-treatment Ndi Igbo received from the centre.

He warned that RUGA was not about cattle but rather a means of forceful occupation of our lands by these people masquerading as herdsmen.

He warned that a tide is rising across the land that could lead to another war to take back our country but prayed it never got to that because war is one last resort that is forever a terrible route to any resolution.

He said even more.

When he was done he was besieged with hugs from every dignitary within the VIP stand, including Igwe HRM Alfred Achebe the Obi of Onitsha, who arrived late to the event. HRM Eze Uzu, the Igwe of Awka, who broke the kolanut at the beginning of the event wasn’t left out in getting to the podium to hug this great speaker.

Believe me, I had two reasons to call FFK an enemy to Ndi Igbo… one was his caustic response to Prof Chinua Achebe when he turned down the then President Obasanjo’s national award. And the other was his nasty narrative of whatever happened between him and Ambassador Bianca Ojukwu, where he was all out to spite Ndi Igbo as a tribe.

All the while he was “becoming our friend” I never trusted him. But having watched him live yesterday, I am now convinced he hasn’t been acting. He wasn’t reading from any prepared speech. He spoke from an inner mind of conviction. He wasn’t trying to impress the audience. If he was he would have praised Anambra State government that hosted him yesterday but he never did. In fact he praised Gov Ifeanyi Ugwuanyi of Enugu and Gov Dave Umahi of Ebonyi..and also the efforts of the new one, Gov Emeka Ihedioha of Imo. He never mentioned Gov Obiano of Anambra for special recognition. Before you think it was all about politics, he didn’t mention Gov Okezie Ikpeazu, his party man at Abia, either.

He didn’t say what we didn’t know before or what no Igbo man or woman has said before. But the huge difference is that it is now coming from a non-Igbo.

It is a new beginning.