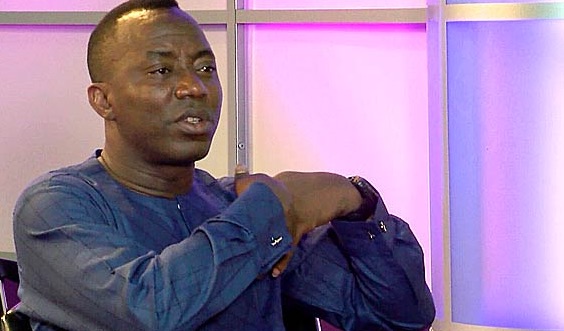 The Clooney Foundation, founded by Hollywood megastar George Clooney and his beautiful lawyer wife, Amal has joined the global call for Omoyele Sowore’s release by the defiant Nigeria’s Department of State Services.

In a statement Friday, the foundation expressed outrage about Sowore’s continued detention and urged the Nigerian authorities to release him, in compliance with the court order.

The publisher of Saharareporters and politician, was arrested in Lagos on 3 August by the DSS, some days to the #revolutionNow protest that he had organised. He has not been released since then, despite first meeting a bail condition prescribed by Justice Taiwo Taiwo.

Although Sowore’s next date in court is 5 December, he met Justice Ifeoma Ojukwu’s amended bail conditions on November 6.

Here is the full statement by the Clooney Foundation

The Clooney Foundation for Justice’s TrialWatch initiative has been monitoring the trial of Omoyele Sowore in Nigeria.

While Mr. Sowore’s trial is still ongoing, the Clooney Foundation for Justice is concerned by Mr. Sowore’s continued detention.

On October 21, 2019, the Federal High Court of Abuja reduced the conditions under which Mr. Sowore could be granted bail – eliminating a cash bail requirement and requiring that Mr. Sowore not speak publicly about political issues and remain within a particular region of Nigeria.

According to defense counsel, Mr. Sowore met those conditions on November 5. The court then issued an order dated November 6 that explicitly stated that Mr. Sowore “has been Released.”

But Nigeria’s Department of State Services (DSS) has not released Mr. Sowore and he remains in custody more than 15 days after this judicial decision.

Amal Clooney, co-President of the Clooney Foundation for Justice, said “It is outrageous that Nigeria continues to imprison a journalist and Presidential candidate after a court has ordered
his release. TrialWatch will continue to monitor Mr. Sowore’s trial and calls on the authorities to implement the court’s order as soon as possible.”

About the Clooney Foundation:

The Clooney Foundation for Justice (CFJ) advocates for justice through accountability for human rights abuses around the world.

We believe that justice means fighting for the rights of individuals unfairly targeted by oppressive governments through the courts: this is what we do through our TrialWatch program. And we work to expose the corruption that fuels grave human rights violations through our other flagship programs: The Sentry, which ‘follows the dirty money’ of human rights abusers to ensure that they face financial consequences through sanctions and other measures; and The Docket, which aims to trigger criminal prosecutions and civil claims against individual and corporate actors who profit from war crimes and human rights abuse.

But justice is more than what is meted out in courts, it is litigated in communities as well. Advancing the cause of justice also means advancing justice for marginalized and vulnerable communities targeted by hate; justice for displaced children deprived of opportunities to learn; justice for refugees seeking to rebuild their lives abroad. Through our projects for marginalized communities, we have partnered with organizations that help to educate refugees, reunite children separated from their parents at the US-Mexico border, and litigate against groups that commit hate-crimes in the United States.