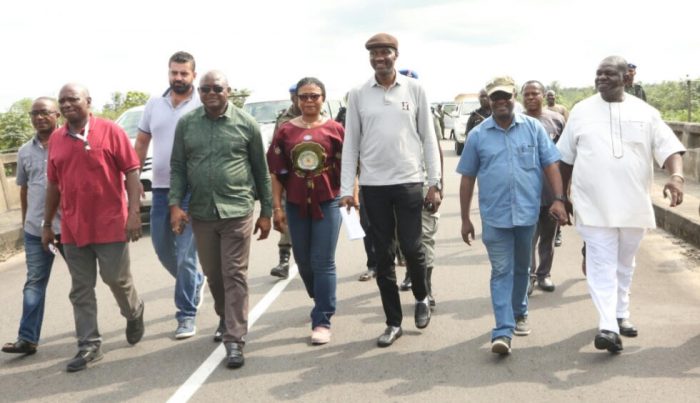 It spans 29 kilometres through swampy terrains in Bayelsa State.

Speaking on behalf of the NDDC Acting Managing Director, Gbene Joi Nunieh, after inspecting the project yesterday, the Acting Executive Director, Projects, Dr. Cairo Ojougboh, affirmed that it aligns with the plans of the NDDC to revisit all legacy projects.

Ojougboh, who was accompanied by the Director, Project Monitoring and Supervision, Engr Emmanuel Audu-Ohwavborua; the Acting Director Utilities, Infrastructural Development and Waterways, Engr Fredrick Ogbeide, and other directors, said the NDDC would make sure that key projects were completed for the benefit of the people of the Niger Delta region.

Ojougboh said that the Ogbia-Nembe Road was handed over to the NDDC over a year ago and efforts were afoot for its commissioning in the shortest possible time. He added: “This is one of the legacy projects which the NDDC will like to showcase because it is a success story of what can be achieved through strategic partnership.

“The goal of the NDDC is to take development to the hinterland where the state governments and other development agencies may have failed to pay attention to. That is part of the mandate of the Commission.”

He observed that communities in the Niger Delta contribute immensely to the economic well-being of Nigeria and were, therefore, deserving of quality projects.

Audu-Ohwavborua, described the Ogbia-Nembe road as a model in partnership, with emphasis on quality job delivery, stating that the collaboration should be encouraged.

He declared: “This is the standard we will maintain for all our road projects. Going forward, we want to extend this to other areas such as shore protection and canalization projects.

“The Ogbia-Nembe road was a good demonstration of what could be achieved when development agencies, companies and state governments collaborate. It is a clarion call to all our development partners. They should take a cue from what Shell has done.”