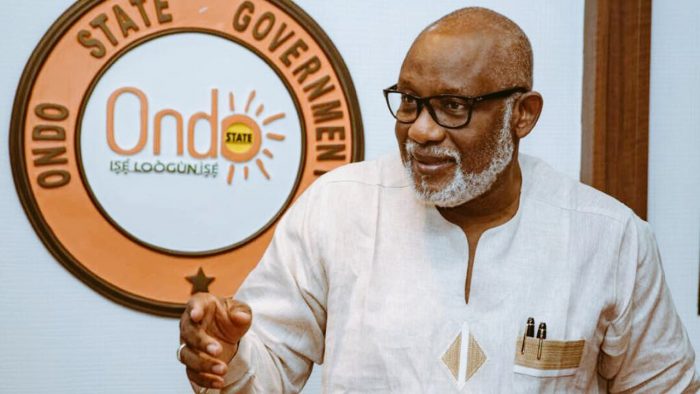 Gov. Oluwarotimi Akeredolu of Ondo State on Monday in Ilorin criticised the proposed capital punishment clause in the hate speech bill before the National Assembly.

Akeredolu expressed his views while delivering an address at the Biennial Conference of the Centre for Peace and Strategic Studies (CPSS) of the University of Ilorin.

He said that the expression of people’s opinions on social and news media should not warrant the death penalty, arguing that whatever people circulate on social media will eventually fade away.

The governor also warned against gagging the free press, saying that at no time should journalists be gagged from performing their statutory functions.

According to him, the courts and not the politicians, either elected or appointed, should determine when journalists or the media house flout the laws.

Akeredolu observed that the quest for peace and progress has been elusive in most developing countries, including Nigeria.

He pointed out that there can be no real peace in an unjust ambience, and that peace is not achieved through wishful thinking.

He also said that the institutions of the state are still weak in most developing countries and that is why it is easy to see certain images of political leaders as representing their respective countries.

The governor, therefore, urged all the tiers of government and political parties to ensure that their interests do not stand against those of the generality of the people, while also canvassing for separation of powers.

Speaking also at the occasion, Gov. AbdulRahman AbdulRazaq of Kwara said that our society must commit more resources and act more than we speak to achieve the Sustainable Development Goals (SDGs).

“We cannot have peace when the largest segment of our society is either excluded from governance or is caught in extreme poverty while their children, battered by malnutrition and lack of access of qualitative education, are denied a fair chance in life,” he said.

According to Abdulrazaq, there can be no peace without justice and the way to sustainable peace and justice is when we have strong institutions that would always work to achieve the two for the collective good of the society.

Earlier in his address of welcome, Prof. Noah Yusuf, Director, Centre for Peace and Strategic Studies of the University of Ilorin, said the choice of this year’s conference theme was a product of exhaustive debates, brainstorming session, research and consultations by the academic staff of the centre.

He added that the issue of SDG 16 came to the fore on the convictions of members that it is perhaps the missing link in the quest of our beloved country, Nigeria, to break the jinx of surmounting her numerous challenges, including poor governance, poverty and corruption among others.

Yusuf disclosed that the centre, CPSS, which was established in 2008/2009 by the former V-C of Unilorin, Prof Is-haq Oloyede would be marking its 10th year anniversary with a roundtable on peaceful 2019 elections.