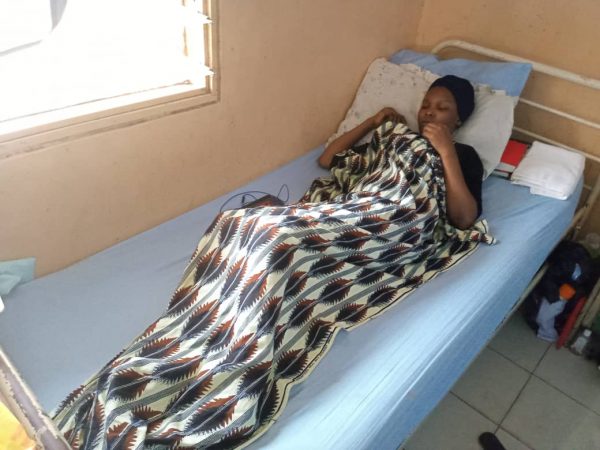 She was the victim of a stray bullet that hit her while having her siesta.

The bullet was said to have been fired from a helicopter on aerial surveillance.

Deborah was sleeping in the Mission House of The Apostolic Church headquarter, Ajara Quarters, Lokoja, when the shot was fired.

The bullet pierced through her body and lodged at the upper region of her thigh very close to her private part.

Conducting newsmen on Wednesday round the scene of the incident, the pastor in charge of the church, Abraham Olusegun said Deborah is daughter of one of the Overseers of the church.

He said the lady was found bleeding profusely.

Pastor Olusegun who said the victim was immediately rushed to the Federal Medical Centre lokoja also narrated how the church was attacked during the last general election.

He said the attack was reported, but the police and other security agencies did nothing about it.

At the Medical Centre, the head of clinical services, Dr Taiwo Jones said the pellet lodged at a very sensitive part of the victim’s body which makes its extraction at the moment very difficult .

He said whenever a bullet was lodged at a very sensitive area of the body that could cause more damage, the best thing to do was to leave it for sometime and allow the body system to react and push the bullet to the surface which will make it easier for it to be removed by surgery.

He said Deborah is responding to treatment and expressed hopes of her quick recovery.

Dr Jones also said the hospital was not spared by the surveillance helicopter.

He said some gunshots were aimed at the premises, which made everyone to scamper for safety.

According to him it was Providence that saved staff and patients of the medical center as two bullets were recovered in the hospital – one at the consultant office and another at the hospital library.

He specifically said the Corp member attached to the library had to run away from her house because of sporadic gunshots to the hospital, only for her to narrowly escape being hit again by some bullet right in her office when she ran to hibernate.

He said when the management of the medical center reported the incident to the police, and submitted the spent bullets.

The police commissioner, Hakeem Busari denied knowledge of any helicopter releasing tear gas or gunshots on the election day.

“How can it happen when we are not in a war situation,” he said.

He explained that the only helicopter used was used for surveillance.

He said it did not even shoot tear gas canisters, wondering how it could have fired gunshots.