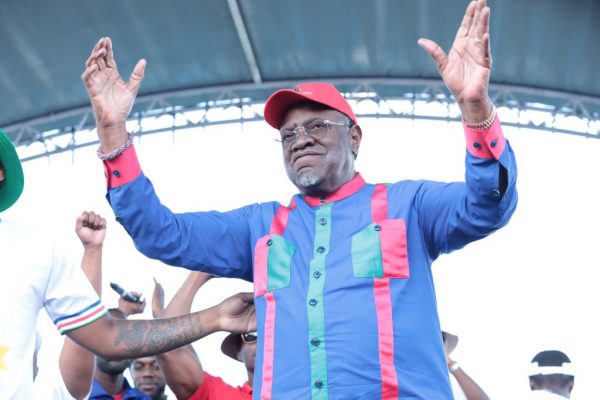 
Polls have opened in Namibia for presidential and parliamentary elections, with forecasts that SWAPO, the ruling party’s hold on power may be threatened by the outcome.

Casting a shadow on the election are resentment stoked by economic hardship and a corruption scandal, that brought down two ministers.

The sparsely populated nation — where the Namib desert stretches along 1,500 kilometres (930 miles) of Atlantic coastline — has been ruled by the South West Africa People’s Organisation (SWAPO) since independence from South Africa in 1990.

President Hage Geingob, who is vying for re-election after his first term was marred by a recession that stirred anger against SWAPO, was the first to cast his ballot at a primary school in the capital Windhoek.

He expressed confidence he would win, but said “If I lost I would accept also. I’m a democrat”.

“This is not the war, this is not the end of the world. We are just exercising our democratic right,” he told reporters outside the polling station.

SWAPO has continued to bask in the legacy of the liberation struggle in the resource-rich country.

“He (Itula) has acted as a lightning rod for frustrations and for people that are unhappy with the president,” said Graham Hopwood of the Institute for Public Policy Research, Namibia’s main think-tank.

While Geingob is widely expected to win, his result is predicted to drop from the 87 percent of votes he garnered in 2014.

Geingob’s SWAPO-lead government took another hit earlier this month when Wikileaks released evidence of corruption in the fishing industry — the country’s second most important after mineral mining.

Two ministers resigned over the scandal, which allegedly involved 150 million Namibian dollars (US$10 million, 9.1 million euros). The ex-fisheries minister was briefly detained over the weekend.

Geingob has denied any involvement and said the timing was deliberately set up to damage his campaign.

In Windhoek’s informal Havana settlement, where corrugated iron houses sprawl the city’s outskirts, indignation against the government is rife.

Around 40 percent of urban dwellers live in shacks, according to the official figures for 2016.