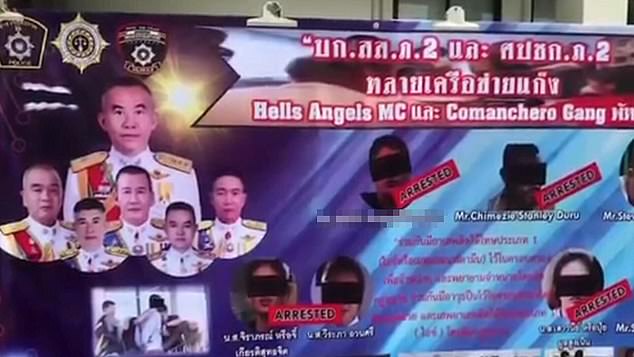 Thai Police poster on those arrested in the drug bust. The Nigerian is pictures middle on top row

A Nigerian Chimezie Stanley Duru, 38, and two Australians aged 46 and 58 were among those arrested during a police drug sting in Thailand Thursday.

The operation netted 1.2 kilogram of crystal methamphetamine, also called ice , guns and a car. The meth was packed in clear plastic bags.

The arrests were made after heavily armed officers swarmed over a high metal gate of a home in the beach-side resort city of Pattaya, about 100km southeast of the capital Bangkok, about 5.30pm on Thursday.

Thai police said at a press conference they were pursuing a network of drug dealers from the Hells Angels outlaw motorcycle gang suspected of selling drugs to foreign tourists, local media reported.

Thai police said the arrests were a significant move against a global drug cartel.

At the press conference yesterday, Thai police posed with a display poster picturing those arrested that mentioned the Hells Angels and Comanchero outlaw motorcycle gangs.