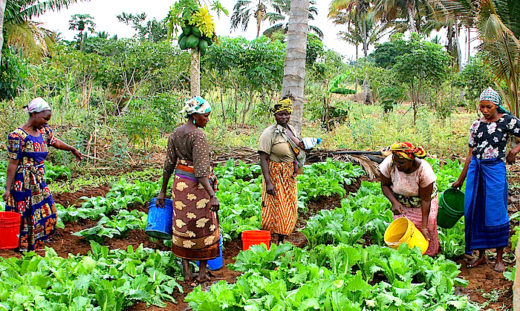 FILE PHOTO: Farmers to converge in Kano in November on impact of AfCFTA on onion production

Alhaji Sanusi Adebayo, a yam dealer in Ajase-Ipo, said the preference for foreign rice had always impacted negatively on his sales and income, but the situation had changed.

“The high preference for foreign rice has never helped our businesses.

“It has been a problem we have been contending with as traders in yam and other local commodities for a very long time.

“It has always been a kind of stiff market competition between foreign rice and local foodstuffs like yams, cassava, beans.

“Even for those of us involved in local rice business, it was the same low patronage until this partial closure of the border changed things for the better.

“I can tell you that since the closure of borders, things have changed positively; apart from the increase in patronage, our income has also been boosted.

“Some of our members who had left the business due to economic downturn are now returning as the market has been more attractive unlike in the period before the closure,” he said.

Mrs Theresa David, also a yam dealer in Iloffa told NAN on Saturday that the partial border closure had turned around the fortune of her business for the better.

“You can see that people have started using yam to do pottage and other recipes during weddings, engagements and other social events more than in the past.

“It is just a matter of if what you want is not available you make do with what you have.

“The unavailability of foreign rice due to the partial border closure has forced people to shift to other foodstuffs like yams, semovita, beans, etc.

“Unlike before the closure, I can now conveniently sell three full truckloads of yam tubers within five market days.

“Candidly, the border closure to me is a necessity that will help our businesses to grow and will also create employment for our youths,” she said.

Alhaji Audu Abubakar, a beans seller, said his sale, supply and income had improved considerably since the partial closure of the borders.

“Before, patronage for beans was not that encouraging, but within the period the borders were closed and now things have improved a lot.

“Before, I sold like two bags in five market days, but now the demand has increased to like five bags, as more people now use beans in place of rice which is now scarce and costly,” he said.

Malam Abioye Dada, a farmer, on his part, said he had also experienced higher patronage and profit on selling of his farm produce since the closure of the borders.

“To me, this closure of the borders is a real blessing as there is significant increase in patronage and of course the profit.

Chief Festus Awoniyi, a community leader and a farmer, said a number of the youth had indicated their readiness to take to farming following the positive turn of events.

“Quite a number of youth have approached me of recent seeking some portions of land to start as farmers.

“This is a good thing for our future, our community and the country as far as attracting the youth to agriculture is concerned.

“It will also take the youth away from illicit acts and other vices.

“It’s a gradual thing, this border closure on its own will solve a lot of problems, and I know one day we will get there,” he said.

Awoniyi, who is also the Iyaloja (Market Leader) in Omu-Aran, said it was very difficult at the initial stage as the scarcity of foreign rice that followed the closure became very tough for members to handle.

“But I can tell you, my members, especially those selling other local commodities like yam, beans, gari are now smiling to the bank.

“We also took steps to invite dealers in local rice, which is more available than the foreign one, and because people have embraced it, we also make our own profit from selling,” she said.

Awoniyi urged the government at all levels to promote unhindered access to credit facilities for traders to expand their businesses.

“Aside that, we also need location of more modern markets in towns and villages to improve sales and storage of farm produce,” she said.