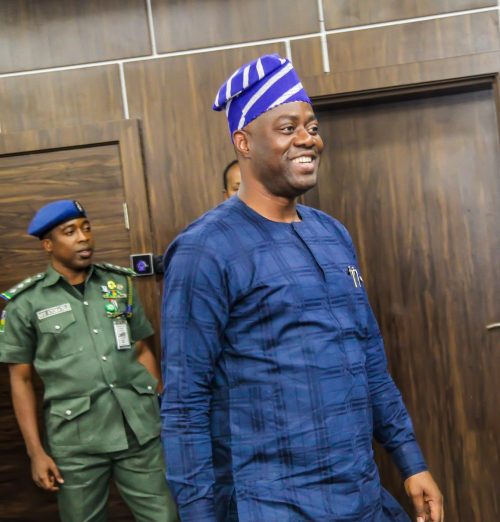 Chairman, Oyo State Universal Basic Education Board, OYOSUBEB, Dr. Nureni Aderemi Adeniran, on Thursday declared that some ongoing 2017 UBEC-OyoSUBEB intervention projects in Ogbomosho and Ibadan would be ready for use at the resumption of pupils next academic term.

Adeniran while inspecting the projects recounted the importance of the projects to improvement of basic education in the state and expressed satisfaction at the standard and speed at which the ongoing projects were being executed, saying most of the projects would have been ready for use for the pupils by the time they resume for school activities next term.

The present administration had on resumption in office called all contractors handling various projects under the 2017 UBEC/SUBEB Intervention projects to a meeting and charged them to deliver on their contractual promises so as to avert the wrath of government.

The Chairman’s first call was Methodist Primary School, Bodija, where he assured the school authority that government would soon site a Model school there in fulfillment of the state government’s pledge to improve learning in the state.

He said, “As soon as we commence the next intervention Project, a Model school would be sited here. Therefore, let me plead with the traders displaying their wares at the entrance of schools, blocking the entrance of this school, to please vacate the space, as a big project would soon commence here”.

The Chairman also visited Anwaru-Islam Primary School, Eleyele, 1,2,3, and St. Peters Primary School, Aremo, where he urged the contractors on site to speed up the projects, against resumption of the pupils, next term.

Among other projects visited was Elewura Community Primary School, Elewura, where the project has been completed and in use already.

Speaking on security threats posed by hoodlums in most public school premises, the chairman reiterated his promise that the state government would ensure arrest and prosecution of anyone found culpable of disturbing the peace of schools, during and after school hours.

Meanwhile, the Chairman also monitored the ongoing Unified examination in all public primary schools in the state, saying that the essence of the monitoring exercise was to ensure that quality returned to the education system in the state.

He maintained that the present administration under Governor Seyi Makinde has strengthened the unified examination so as to nurture the pupils from the scratch, stressing that the effort would go a long way in curbing poor performance of students in external examinations.